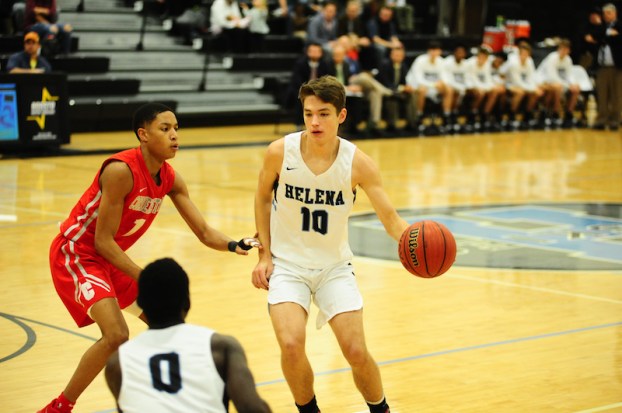 Helena picked up two solid road wins against James Clemens and Hueytown in the days leading up to the Fort Payne Tournament. (File)

After picking up their tenth win of the season on Dec. 14, with a 52-35 win over Chilton County, The Helena Huskies boys basketball team kept the momentum going with two more impressive wins on the season.

The Huskies defeated James Clemens on Saturday, Dec. 16, at Wallace State by a score of 54-39 and picked up a 56-53 overtime win over Hueytown on Dec. 18. Below are recaps of how both games went down.

Helena hit the road to play on a Saturday for the first time this season and the result was eight different Huskies recording points in the scorebook in the contest.

Nate Andrews and Deven Tucker both finished in double-figures for Helena as Andrews tallied a team-high 12 points while Tucker added 10 points.

Helena used a barrage of 3-pointers in the first half to take a commanding lead into halftime. The Huskies knocked down six 3-pointers as Justin Stuckey and Andrews each had two deep balls and Ben Rose and Austin Laatsch also knocked down a trey to give Helena a 26-12 halftime lead.

Helena was not as effective from beyond the arc in the second half hitting just one three, but James Clemens was never able to close the gap.

The Huskies had a tough time guarding Antonio McGinnis of James Clemens who finished with 17 points but he was the lone Jet to finish in double-figures.

Both Stuckey and Laatsch finished with eight points for the Huskies in the win.

Helena hit the road for the second time in three days as the Huskies traveled to Hueytown for a tough game against the Golden Gophers.

What ensued was a down-to-the-wire matchup that resulted in the Huskies pulling off a thrilling 56-53 overtime win.

Ben Rose finished as the leading scorer for Helena with 13 points, while Justin Stuckey finished with 12 points in the game with five of those coming in overtime.

Stuckey’s biggest points of the night came with six seconds left in overtime with the Huskies clinging to a 54-53 lead. The Huskies inbounded the ball in the backcourt forcing Hueytown to foul Stuckey sending him to the foul line. Stuckey calmly drained both free throws and Hueytown’s last second heave fell short to send the game to a second overtime.

In what has become routine for Helena, the Huskies saw multiple players record points in the game as both starters and reserve players contributed offensively. Nine different players recorded at least one basket against the Golden Gophers.

With both wins, Helena improved to 12-1 on the season as they will hit the road again on Wednesday, Dec. 20, to play in the Fort Payne Tournament before the Christmas holiday.

Three score in double-figures as Helena takes down Chilton County