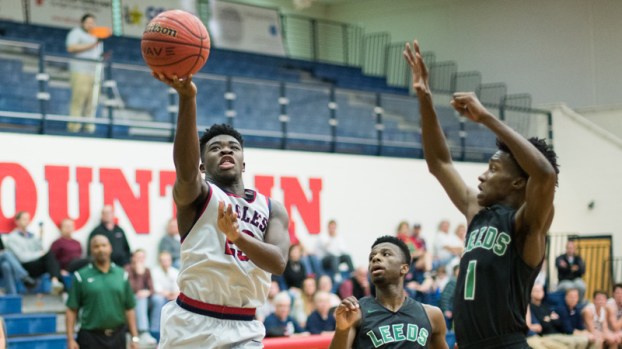 NORTH SHELBY – Dominant interior defense and relentless activity on the boards paved the way for the Oak Mountain Eagles (4-3) as they ran their record above .500 for the first time this season.

The Eagles didn’t allow a single offensive rebound until the fourth quarter and only gave up one basket in the paint as they downed the Leeds Green Wave (8-7) in the first round of the Zaxby’s Invitational, 55-43.

Oak Mountain head coach Chris Love is pleased with his team’s recent improvement as they moved into the winners bracket of their home tournament.

“We’ve been pretty solid these last two to three weeks getting a little bit better each week, each game. We got better at some things tonight, some things we have to work on, but I was proud of our defensive effort tonight.”

Chris Mayweather paced the Eagles in the first quarter scoring seven of his team-high 22 points as Oak Mountain took a quick 16-9 lead.

Leeds was able to stay in the game using their long range shooting to connect on four three-pointers in the first half, and with Mayweather stifled in the second quarter, was able to stay within striking distance at the half, 24-16.

Mayweather wouldn’t stay quiet for long though and scored the first five points of a 10-1 run that put Oak Mountain in the driver’s seat for good.

Drew Dunn (who scored 17 points) and Mayweather would go on to score all 12 third quarter points for the Eagles, but they weren’t done yet.

The dynamic duo would score 15 straight in the fourth quarter to ice the game for the Eagles.

Appropriately enough, Love had more than enough good things to say about their performance.

“Chris brings a lot of energy, he loves the game and when he’s out here in between the lines he’s always giving us a great effort. He got a lot of points tonight off of steals and hard hedging off of ball screens and his second half was probably a big reason why we got separated from them there at the end.”

Love also appreciates what he has in Drew Dunn who is underestimated by most of the Eagles’ opponents.

“He’s so skilled as a ball handler, his footwork and a really good shooter. He’s got some quickness some people don’t really know about and when you pair a skilled player with the type of athlete he is, that’s a hard player to guard.”

By SETH HAGAN Special to the Reporter NORTH SHELBY – A tough night shooting the ball on the road put... read more