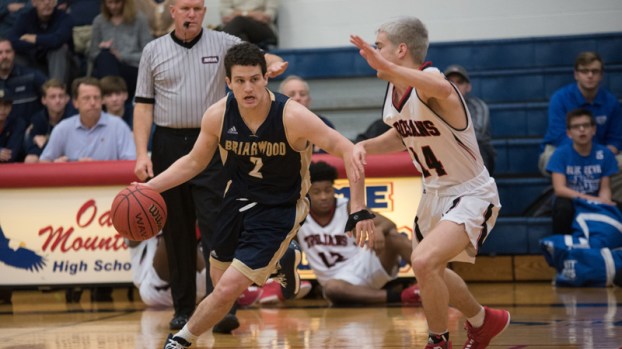 Carson Donnelly and his Briarwood teammates fell to Muscle Shoals in the first round of the Zaxby’s Invitational. (REPORTER PHOTO/KEITH MCCOY)

NORTH SHELBY – A tough night shooting the ball on the road put an end to the Briarwood Christian Lions’ three-game winning streak on Wednesday, Dec 20, as the Muscle Shoals Trojans (6-2) advanced to the next round in the Zaxby’s Invitational with a 64-46 win.

Michael Hiers had another productive night for Briarwood and scored 10 of his team leading 19 points in the first quarter to keep the Lions competitive.

However, a balanced effort from Muscle Shoals was in the works from the very beginning with all five starters scoring in the first period.

“It took us a while to get used to the speed of this game,” said Lions head coach Bobby Kerley.

Despite full court pressure from the Trojans in all four quarters, the Lions took care of the ball for the most part, but the constant barrage took a noticeable toll on the team as Hiers’ teammates struggled to contribute.

“Their calling card is pressure man-to-man defense and they do a great job with it,” said Kerley. “Michael (Hiers) and Carson (Donnelly) are our two players who are better equipped to handle it, but (Muscle Shoals) did a good job of taking us out of sets we like to run for guys that aren’t as good with the ball in their hands.”

The Trojans took a 36-20 lead into halftime with Michael Hiers scoring 13 of those 20.

The Lions caught a little rhythm in the second half as Carson Donnelly scored nine of his 15 points in the third quarter, but the Trojans used four three pointers to key a 14-4 run to give MSHS their biggest lead of the game, 56-30.

Jacob Vanover hit two of his four three-pointers during that stretch to end the game with 12 points. He was bested only by Mark Sears who finished with a team-high 13 points in the win.

The Lions were set to play at least two more games in the tournament and Kerley believes two things will help BCS finish out 2017 the right way: “Our main focus is patience and trust. I can see where we’re going and once we get more practices with the full roster I’m excited about where we’re headed.”

By GRAHAM BROOKS / Staff Writer After picking up their tenth win of the season on Dec. 14, with a... read more