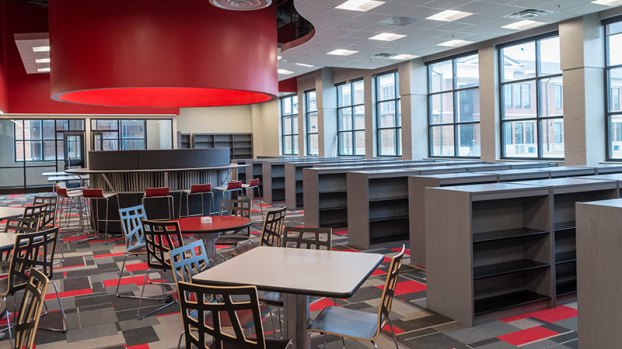 The main academic building of the new Thompson High School, which includes the media center looking out at the large courtyard area, will be 1921 Warrior Parkway. (Reporter Photo/Neal Wagner)

ALABASTER – The street address of the main academic building for the city’s new high school, 1921 Warrior Parkway, will serve as an indicator of the school’s name, as it harkens back to the area’s history.

When it opens to students, the new school will remain Thompson High School, as the original THS was founded in 1921.

“As a group and as a school board, we never had any discussions of changing the name. It was never even an agenda item at a board meeting,” Alabaster School Superintendent Dr. Wayne Vickers said while touring the school site on Dec. 21. “When we move, we’ll be moving into the 2018 version of Thompson High School.”

As of Dec. 21, the school system was still awaiting the certificate of occupancy from the state building inspector, which will determine when the school is able to open to students and teachers. The new school is tentatively set to open to students on Jan. 4, but ACS will not have a concrete opening date until the certificate of occupancy is issued.

“We will move in as soon as it’s ready. As soon as they give us occupancy, we will move,” Vickers said.

Alabaster School Board President Adam Moseley echoed Vickers’ sentiments, and said the city is eager to occupy the new THS as soon as the certificate of occupancy is issued.

“We are excited to get our students in as soon as it’s safe for them to occupy the building,” Moseley said. “We are a little more than three years away from the 100th anniversary of Thompson High School in 2021, and we are looking forward to celebrating that.”

The cafeteria, which will be able to seat 625 students in a variety of booth, high-top and restaurant-style tables, was receiving its final cleaning. Furniture and desks were in place in nearly every classroom and the school’s media center, the atrium and the area surrounding the main lobby were receiving their final touches and the auxiliary gym was ready to welcome basketball games.

An area in the central part of the academic building will serve students with significant special needs, and includes a sensory room, a separate restroom and laundry area and a room set up like a traditional home designed to help students hone their life skills.

“We tried to take care of everyone we have at the school, whether it be academic, extracurricular or athletic,” Moseley said.

While the building is nearly complete, Vickers said it is still under the care of the construction contractors, and is not yet open to the public because it remains an active construction site. Crews recently posted no trespassing signs at the entrance to the school campus.