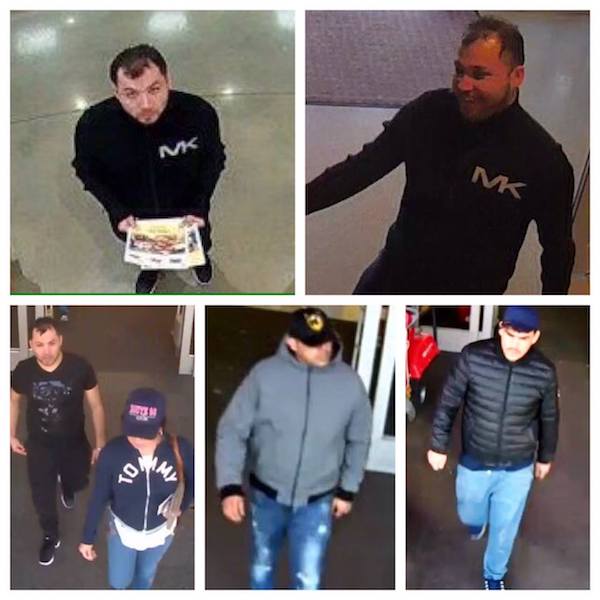 Police in two cities are working to solve a string of theft-related crimes that occurred at several locations in Alabaster and Hoover. (Contributed)

ALABASTER – The Alabaster and Hoover Police Departments are both working cases to solve a string of thefts and fraudulent purchases in their cities involving the same four suspects. The HPD identified the suspects as three men and one woman, all of whom are white.

“We’re hoping someone will recognize these people and call us,” HPD Lt. Keith Czeskleba said.

According to the APD, several suspects are wanted for questioning after a theft occurred at the Aldi on Simmsville Road in Alabaster on Nov. 25. According to APD Lt. Grant Humphreys, the suspects stole an unattended wallet from an Aldi customer and used their debit card to fraudulently make purchases from another store in Alabaster.

Since the APD released information about the crimes to the public in late November, Humphreys said they received several tips but were not able to locate or identify the suspects.

A release from the HPD stated that they believe the same suspects involved in the Aldi theft also committed similar crimes at several locations in Hoover.

“It was the exact same thing (as in Alabaster). It’s not like people who do this only do it in one location,” Humphreys said.

Czeskleba said one theft occurred at the Whole Foods in Riverchase Village after a victim’s wallet was stolen from their purse, which was unzipped and sitting inside of a shopping cart. Shortly after the first theft, the suspects allegedly used the victim’s card to purchase $900 worth of merchandise at the Target on Grove Boulevard.

“It’s kind of surprising, because when we post something (on Facebook), we usually get at least one phone call,” Czeskleba said. “There’s a chance that they might not be from around here. People may not be calling because they don’t recognize them.”

If arrested, Czeskleba said all four suspects could each be charged with fraudulent use of a credit or debit card and, if there is sufficient evidence, theft of property.

Anyone who has additional information on any of these crimes is encouraged to call the APD at 663-4701, the HPD at 822-5300, HPD Detective Jennifer Stewart at 444-7616 or CrimeStoppers of Metro Alabama at 254-7777. Anonymous tips can also be submitted at Hooverpd.com or Crimestoppersmetroal.com.

Czeskleba and Humphreys also encouraged residents to stay alert and keep a close eye on purses and wallets, especially during the holiday season.

HOOVER – In his second “State of the City” address, Hoover Mayor Frank Brocato highlighted accomplishments during his time in... read more