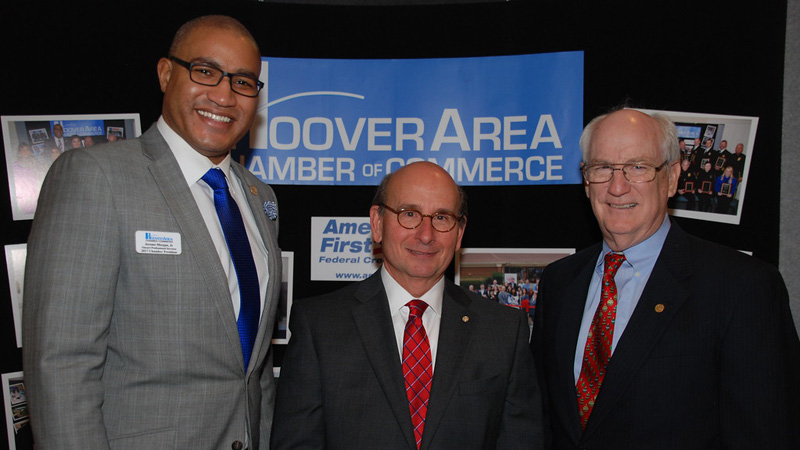 HOOVER – In his second “State of the City” address, Hoover Mayor Frank Brocato highlighted accomplishments during his time in office and also recognized the city employees and other community members who make Hoover what it is.

The address was given during the Hoover Area Chamber of Commerce luncheon on Thursday, Dec. 21, at the Hoover Country Club.

Brocato first recognized Chamber Director Bill Powell, who was possibly presiding over his final luncheon as he plans to retire soon.

“You built an incredible Chamber of Commerce,” Brocato said at the beginning of a period of recognition, including for his family and the Hoover City Council. “They work tirelessly for the city of Hoover.”

Brocato said he thinks Hoover residents “describe the state of the city,” and pointed out many contributors to the city’s success, such as the planning and zoning board chairman, senior center director, a World War 2 veteran, a Bumpus Middle School teacher and three Spain Park High School students who are part of an effort to raise scholarship money for fellow students in need.

The mayor discussed efforts surrounding the celebration of Hoover’s 50th anniversary and the Future Hoover initiative, in which city officials held town hall style meetings across the city to solicit feedback from residents.

“If there’s anything we learned from this, it’s that we’ve got to continue these meetings,” Brocato said.

He also lauded the efforts of the city’s police and fire departments, including the city earning a Class 1 ISO rating for the first time.

“We’re finishing 2017 with a major reduction in crime in our city, and this is a testament to the work of Chief (Nick) Derzis and the Hoover Police Department,” he said before also praising the city’s library and parks and recreation and public works departments.

Brocato said he came into office with many goals and talked in-depth about three of them:

-Increase financial support to the school system. Brocato said the city has doubled the amount of money it gives Hoover City Schools, from $2.5 million to $5 million. “We have an incredible school system, and it sells Hoover as much as anything we do,” he said.

-Change planning toward walkability and a village-center approach. Brocato said the city has hired a planner for the first time. “I’m so excited to see us all moving in the same direction.”

-Diversity the economy. Hoover issued about 10,000 business licenses in 2017, Brocato said and added that the city and its first economic developer especially recruit STEM and white collar industries.

“We have a bright and prosperous future ahead,” Brocato said.