ALABASTER – A juvenile was treated and released at a local hospital and a 41-year-old Alabaster man is facing up to 10 years in prison after an alleged incident of child abuse in the city’s Navajo Hills neighborhood in late November. 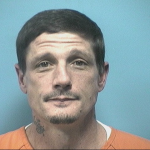 The Alabaster Police Department arrested Philip Wayne Workman, who lists an address on West Navajo Drive, on Dec. 21 and charged him with one felony count of willful abuse of a child younger than 18.

The arrest came about a month after a Nov. 28 incident was reported to the Shelby County Department of Human Resources, who investigated the case and determined criminal charges were warranted, said Alabaster Police Lt. Grant Humphries.

The 10-year-old victim in the case was treated and released from the hospital after the incident, but did not suffer life-threatening injuries.

“It was a pretty clear-cut case of child abuse in this case,” Humphries said during a Dec. 22 interview.

Willful abuse of a child is a Class C felony, and carries a maximum penalty of 10 years in prison upon conviction, according to Alabama law.