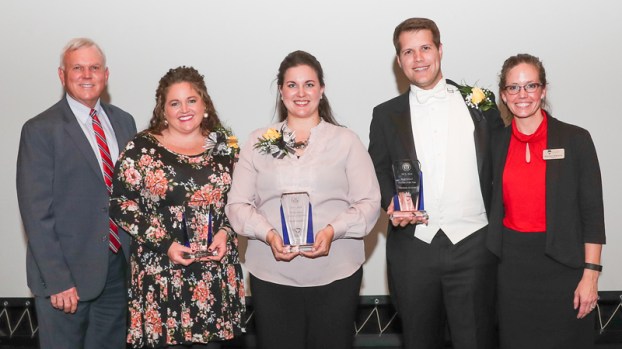 Recognition for a job well done

Educating children is among the most important jobs in our society, yet it’s not among the highest-paying professions.

Instead, teachers are compensated in other ways—mainly through the fulfillment of seeing their students learn and grow and go on to live satisfying lives themselves.

But it’s also nice when teachers are recognized by their peers for the job they do.

There is perhaps no better example of this each year than the Teacher of the Year Celebration, which was hosted on Monday, Dec. 4, at Oak Mountain High School by the Shelby County Schools Education Foundation.

Foundation Director Kendall Williams led the program, which followed a reception at the school, and said presenting the awards has become one her favorite parts of her position.

Each school in the Shelby County School system chose a nominee for either Elementary, Middle or High School teacher of the year; and those nominees were honored on the stage with a plaque at the OMHS performing arts center.

The most emotional parts of the program were when videos were played for each teacher of the year that contained comments from students, administrators and peers.

Comments about the teachers of the year included:

“She’s a model for teachers in our building.”

“She is a hard worker; she is dedicated to students’ success.”

“She has that gift of being able to relate to any student.”

“She lets you just be yourself.”

“She knows her students so well. She makes an extra effort to make that relationship with them, and I think that makes the difference.”

“I really can’t think of anyone in the building he doesn’t work well with.”

“He is honestly the most passionate and compassionate teacher I have ever had.”

These teachers—and many others—make a positive difference in the lives of students and our communities. They deserve all the thanks we can give them.

Standing in the gap

By BRIANA HARRIS / Staff Writer Since the death of Pelham police Officer Philip Davis in 2009, the Pelham Police... read more