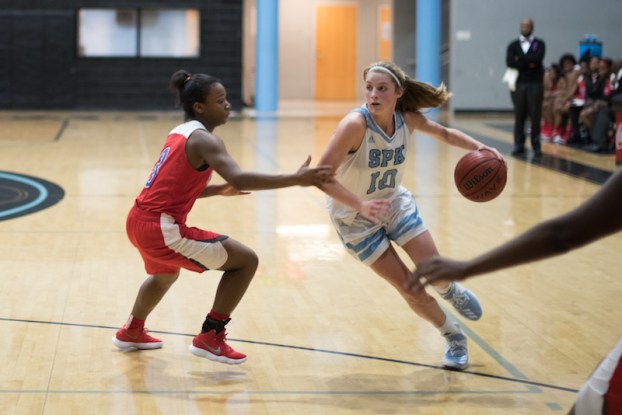 HOOVER – Spain Park defended its home court in dominating fashion the week before Christmas as the Jaguars played host to the 2017 Chevron Lady Jag Classic Dec. 21-23.

After losing to Ramsay 48-44 for the third time this season the day before the tournament kicked off, the Jags had two choices, let that affect them or let it fuel them.

There was an unwavering of doubt from Spain Park as the Jaguars let that tough loss to Ramsay, who has handed them all three of their losses this season, propel them to four straight victories en route to winning the title on their home floor.

In the championship game, SPHS used strong defense in the first half to build up a sustainable lead that they didn’t relinquish against the 6A No. 1 LeFlore Rattlers.

The 7A No. 3 Jags limited LeFlore to just six points in the first and second quarter on their way to dominating 29-12 lead at the half.

LeFlore did everything it could to battle back in the third quarter after making some halftime adjustments. The Rattlers were able to put a huge dent in the Jags’ lead by outscoring them 21-13 in the quarter.

Spain Park, however, still held a 42-33 lead heading into the final quarter of play and got back to its dominating ways in the final period. The Jaguars outscored LeFlore 19-10 over the final 8:00 of play to sew up the championship run.

Claire Holt and Barrett Herring were both named to the All-Tournament team for their effort in all four of Spain Park’s wins.

It marked the first of two top 2 teams Spain Park had to face on the day as Wenonah is ranked No. 2 in the 5A standings.

In what became a trend of the tournament for SPHS, it didn’t matter how good the opponent was, they came ready to play. It led to the Jags pulling off a dominating 59-44 win over the Dragons.

In the two days before, Spain Park beat Pleasant Grove 76-27 and George Washington Carver 62-40, to put the Jaguars’ average margin of victory at 25.75 points per game. They beat every team they faced by at least 15 points in the tournament.

Spain Park has now won six of its last seven contests and sits at 12-3 on the season.

Tena Niven gets win No. 300 at Montevallo

By ALEC ETHEREDGE | Sports Editor HOOVER – For the past 16 years, the Montevallo basketball court has been graced... read more