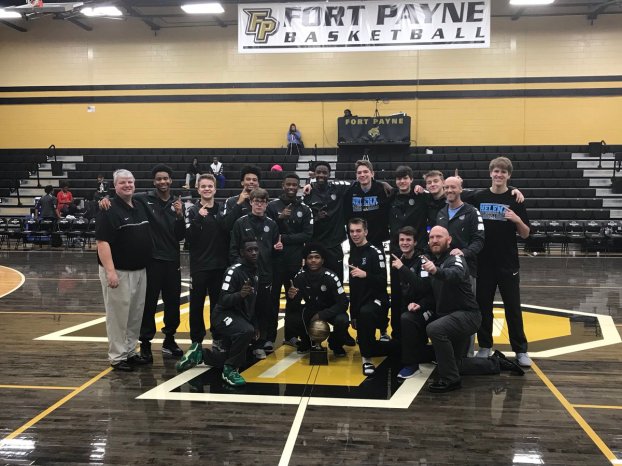 Helena poses with its Wills Valley Shootout championship trophy after winning three straight games to defend its title. The Huskies are now 15-1 on the season. (Contributed)

FORT PAYNE – After a 9-0 start to the 2017-18 basketball season, including head coach Chris Laatsch picking up his 350th career victory, the Helena Huskies looked unbeatable.

That was until they faced adversity for the first time on the road at McAdory on Dec. 11. A team they beat 53-42 just seven days earlier, the Yellow Jackets bounced back with a thrilling 41-39 win over the Huskies to end their unbeaten start.

Helena’s players were determined after the loss, which also dropped them from the No. 1 spot in the 6A standings, that they would respond in a big way and the Huskies have done just that.

They went on to pick up three wins in a row over Chilton County, James Clemens and Hueytown heading into the Fort Payne Wills Valley Shootout Tournament.

For the second year in a row, the Huskies were able to win three straight games to bring home the championship and defend their title.

Helena beat Sipsey Valley 59-38 to open the tournament, Scottsboro 66-38 in the semifinals and Lawrence County (TN) 42-39 in a thrilling championship game to extend its win streak to six games.

In the title game, Helena got off to a nice start offensively, posting 13 points in the first 5:30 of the game to just nine points from Lawrence County. The Wildcats were able to respond with a 6-2 run over the final 2:30 of the opening period to tie the game 15-15 at the end of one.

Lawrence was able to continue that run into the second quarter outscoring the Huskies 11-7 in the quarter, leading to a 26-22 advantage for the Wildcats at the half.

Coming out of the break, the momentum swung sides in a tough battle by both teams. Due to strong play on defense, Helena was able to eventually grab the advantage late in the quarter and take a 36-33 lead after outscoring the Wildcats 14-7.

That defensive effort continued for Helena in the final quarter, but Lawrence County’s defensive pressure also picked up, which led to very few offensive points.

Through the first 3:51 of the final quarter, the only basket was a Wildcat 3-pointer to tie the game at 36-36.

Over the next 3:19 of play, the two teams combined for just seven points, four from Helena and three from Lawrence County. It gave the Huskies a 40-39 advantage with just 49.9 seconds remaining in the game.

With 20.7 seconds left, Ben Rose went to the line looking to extend that lead and give the Huskies a three-point advantage. He calmly sank both free throws in a very clutch situation to give Helena a 42-39 lead.

The Wildcats missed an ensuing 3-pointer and the Huskies were able to hang on for the 42-39 win to take home the championship.

With the win, Helena moved to 15-1 on the season and has one of the best basketball records in the state. The Huskies have won their last six games by an average margin of victory of 14.5 points per game with four of the six wins coming by 15-plus points.

By GRAHAM BROOKS / Staff Writer The Helena Huskies boys basketball team is being shown some love in the latest... read more