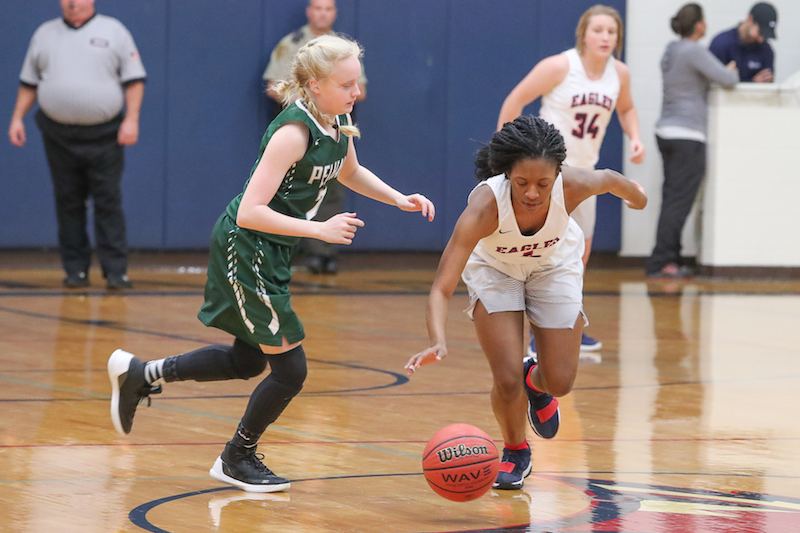 Kailey Rory had 21 points as Oak Mountain topped Cullman 59-51 to advance to the semifinals of the Mortimer Jordan tournament. (File)

KIMBERLY – Oak Mountain’s girls basketball team took to the floor in the first round of the Mortimer Jordan Holiday Tournament on Wednesday, Dec. 27, and maintained control throughout against Cullman to advance to the semifinals with a 59-51 win.

The game came down to free throw shooting in the final quarter as the Eagles attempted 20 free throws in the period to five from the Bearcats.

Oak Mountain knocked down 15 of those free throws and despite a couple of late 3-pointers from Cullman, that strong shooting percentage from the line allowed them to hang on.

The fouls were a trend in the second half as the two teams combined for 25 fouls, 16 of which came from Cullman.

In the early going, however, the game was tightly contested with Oak Mountain holding a slight 10-8 lead at the end of the first quarter.

The Eagles were able to turn up the pressure on both ends of the floor in the second quarter outscoring the Bearcats 17-7 in the period to take a 27-15 lead at the half.

Oak Mountain was able to go 8-11 at the free throw line in the quarter, while Cullman got to the line just four times and knocked down just two free throw lines.

The Eagles carried that momentum over to the start of the third quarter and grabbed their largest lead of the game at 35-20 before Cullman ended the quarter on a strong run.

Cullman used the shift in momentum to its advantage and drained a 3-pointer to open the fourth quarter as the Bearcats continued a 9-0 run dating back to the third quarter.

The spurt got Cullman within four points at 38-34 before a beautiful inbounds pass to Abbie Brown, two free throws from Kailey Rory and an offensive put back by Hannah Edwards put the Eagles back on top by nine points at 46-37.

The Eagles eventually extended that lead back to double digits at 12 points before Cullman hit a couple of 3-pointers, one banked off the glass, and went on a strong run to pull within four points again.

Leading 55-51, Kennedy Smith and Rory knocked down four consecutive free throws to preserve the win for Oak Mountain over the final 40 seconds.

Rory paved the way for Oak Mountain with 21 points in the game, while Smith added 17 additional points. Edwards, who was dominant in the paint and on the boards, added another double-digit scorer with 11 points.

The Eagles moved to 10-3 with the win and advanced to the semifinals of the tournament.