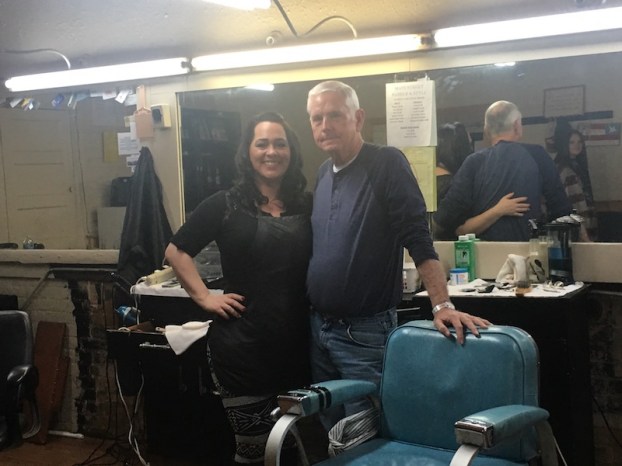 Columbiana resident Johnny Goff (right) was recently hired at Main Street Barber and Style. Goff had been retired for six weeks before taking the job and has about 40 years of experience as a barber. (Reporter photo/Amalia Kortright)

COLUMBIANA – Veteran barber and Columbiana resident Johnny Goff recently finished his first day of work at Main Street Barber and Style on Thursday, Dec. 28. Owner Jennifer Kellum said she knew of Goff from mutual friends in the barbershop industry. According to Kellum, Goff is one of the few barbers in the area who exclusively cuts men’s hair.

“He’s the best around, and we needed a barber,” Kellum said. “He’s a 100 percent, true barber. I needed a respectable man with a good following.”

“I’m the only real barber in Columbiana, and in Calera when I worked there,” Goff added.

Goff had been retired for about six weeks from another barbershop before he decided to return to his career.

Goff said he wanted to work at Main Street Barber and Style because of its reputation for quality haircuts. So far, Goff said he’s especially enjoyed seeing old friends from the area and meeting new people.

“This is the best shop in Shelby County,” Goff said.

Kellum said Main Street Barber and Style faced issues after one of the barbers was fired and arrested for burglary in November. While she is heartbroken at the situation, Kellum said she is looking forward to seeing how Goff will help improve business.

“We are known for giving the best haircuts, and I intend to keep it that way,” Kellum said.

Goff works at Main Street Barber and Style from 8 a.m. to 6 p.m. on Thursdays and Fridays. To schedule an appointment with him, call 552-4658.