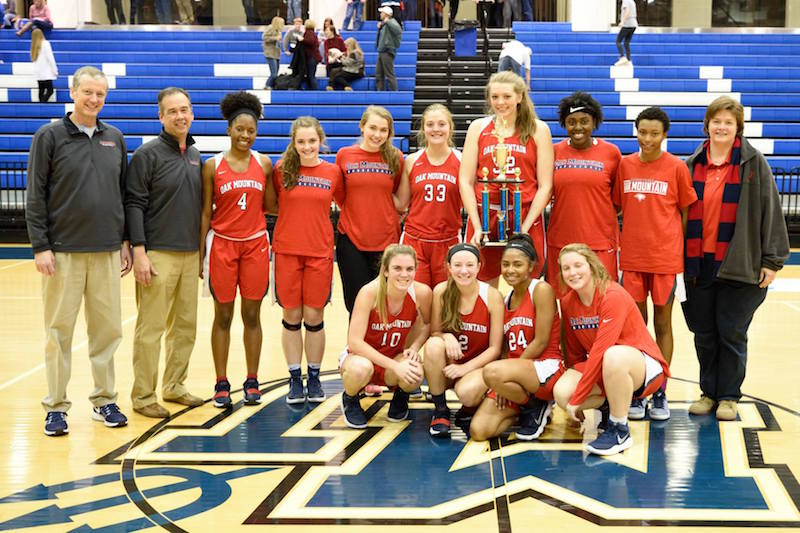 The Oak Mountain girls, now 12-3 this season, pose with their championship trophy after beating Briarwood in the Mortimer Jordan title game. (For the Reporter/Larry Dancy)

KIMBERLY – What was an impressive run by both teams ended in the championship game of the Mortimer Jordan Holiday Tournament as Oak Mountain and Briarwood put winning streaks on the line for a chance at the title and three straight wins.

While the Eagles had been playing extremely strong basketball this season coming into the championship with an 11-3 record, it marked the best two games Briarwood had played this season as the Lions had gotten to 5-6.

Oak Mountain, however, has been strong all season and showed its strong presence on the defensive end of the floor as the Eagles picked up their fifth win in a row by a final score of 35-26.

Despite the struggle of output on the offensive side of the ball, Oak Mountain came out strong in the opening two quarters of play.

Behind one 3-pointer apiece from Kennedy Smith and Emily Cruce, the Eagles posted 10 points in the first quarter as Cassady Greenwood added two jump shots as well.

The defense made its presence known early as well as the Eagles contested every shot and made life difficult. If Briarwood got a good look at all, Oak Mountain fouled them to make the Lions earn it at the stripe.

It led to just one made basket in the first quarter for the Lions, a 3-pointer from Lauren Smith, while they made 3-of-4 free throws.

With a 10-6 lead, Oak Mountain had gotten off to the start it had hoped and continued to use the momentum to spark its strongest quarter of the game in the second period.

Thanks to six points from Hannah Edwards in the post and 3-pointers from Kailey Rory and Abi Brown, the Eagles were able to put up 13 points in the quarter.

The Eagles continued the strong play on the defensive end as well, limiting Briarwood to seven or less points for the second consecutive quarter as the Lions posted just seven. Oak Mountain was able to take a strong 23-13 lead into the break.

Briarwood came out of halftime a completely different team on the defensive end of the floor as the Lions limited Oak Mountain to just three jumpers in the third quarter, while having their best quarter of play offensively. 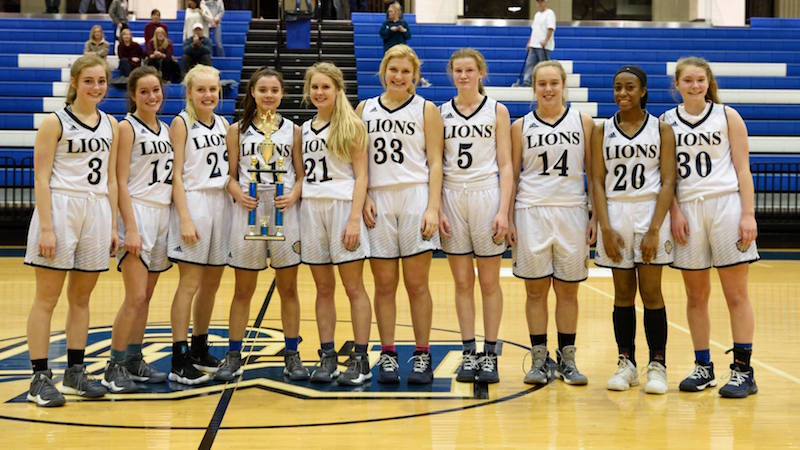 The Eagles’ defense rose to the occasion in the final quarter and preserved the lead as they have much of the season. They limited Briarwood to just two made jumpers and five total points in the period, completing a strong four quarters of play that saw the Lions limited to less than double figures in each.

Oak Mountain added six additional points in the final quarter as the offense continued to struggle, but the cushion built up in the first half was plenty for the Eagles’ stout defense.

Edwards was the only Oak Mountain player in double figures with 10 points, while Cruce, Rory and Kennedy Smith each had at least five.

Lauren Smith was Briarwood’s offensive production with 11 points as she knocked down three 3-pointers in the contest.

Oak Mountain is now 12-3 on the season ahead of the Jefferson-Shelby Classic.