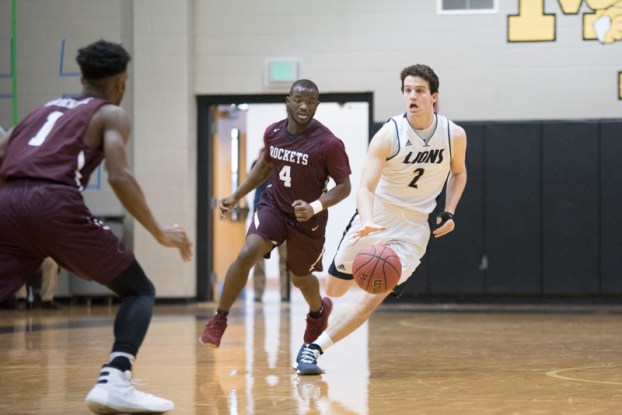 Briarwood's boys were one of seven teams to kick off play in the Jefferson-Shelby Hoops Classic on Tuesday, Jan. 2. (Reporter photo/Keith McCoy)

A total of seven teams opened up play in round one of the Jefferson-Shelby Hoops Classic on Tuesday, Jan. 2, while Helena and Oak Mountain each had byes in the first round. Of those seven teams, four picked up wins including a huge win for the Montevallo Bulldogs and a thriller from the Briarwood Lions. Below is a recap from all of the opening-round action.

The Vincent Yellow Jackets, who still sit at No. 1 in Class 2A as of the most recent rankings, picked up yet another win to grab their 12th of the season. The Jackets (12-4, 2-0) topped Oak Grove 57-36 thanks to 18 points and nine rebounds from Chris Hardie as well as 16 points and six rebounds from Jackson McGinnis. Zavien Kelley added nine points as well. Vincent will play the winner of Montevallo/Corner on Thursday at 8 p.m. at Corner High School.

Montevallo (6-6) moved to .500 in a big way in the opening round with a dominating 63-36 win over a very good Fultondale team. The Bulldogs got an unbelievable performance from Jamarcus Green, who posted 30 points and four assists in the game. He was 8-13 from the 3-point line.

Daqwan Bryant also made his return from a broken leg early in the football season to post nine points. Jabrian Sullens had a strong game on the boards with 15 rebounds. Montevallo will play Corner at Corner on Wednesday at 8 p.m.

Briarwood’s boys continue to be one of this year’s fun teams to follow. After a thrilling 40-39 win over Gardendale in the first round of the tournament, the Lions moved to 8-4 (1-0) on the season. They’ll play Shades Valley in the second round on Wednesday at McAdory at 8 p.m.

It took a valiant effort for the Eagles to continue their winning streak, but they were able to win a close 59-56 game over Hueytown to improve to 12-3 on the season and win their 10th consecutive game. Calera will now move on to the second round where they’ll take on Minor at home at 8 p.m.

The Thompson boys did pick up a win in the Metro tournament, but were unable to follow that up with a second win over Center Point to open the Jefferson-Shelby tourney. The Warriors fell 50-39 to Center Point despite 16 points from Zach Littleton and 10 points from Paris Whatley. They’ll play again on Thursday at 5 p.m. at Calera.

Chelsea is on the trend of win a game lose a game and after winning in their last outing, the Hornets were due a loss and that’s just what happened in the first round. They took on a very impressive Pleasant Grove team and fell 54-42, but fought hard the entire night. Chelsea led 20-17 at the half and trailed 35-31 at the end of three before eventually falling in the fourth. The Hornets will play Shelby County on Wednesday at 3:30 p.m. at Oak Mountain.

Shelby County struggled to get any sort of momentum on the offensive side of things in its first-round game, which led to them failing to score more than 18 points as they fell 55-18 to Clay-Chalkville. They’ll play Chelsea on Wednesday at 3:30 p.m. at Oak Mountain.

Photos from day one available at Shelbycountyphotos.com

By ALEC ETHEREDGE | Sports Editor In 2016, 20 football players from across Shelby County had the privilege of being... read more