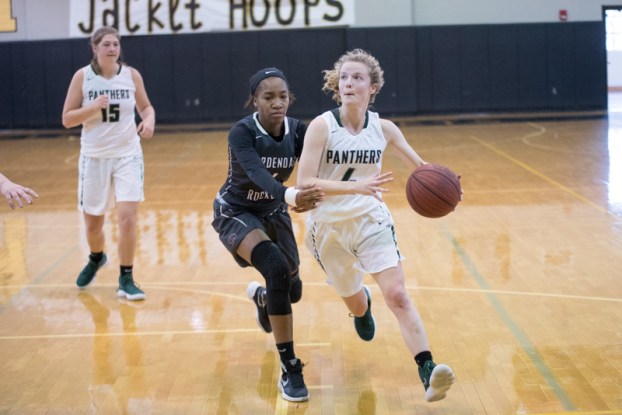 Pelham's girls were one of six Shelby County girls teams to pick up a win in the first round of the Jefferson-Shelby Hoops Classic. (Reporter photo/Keith McCoy)

Round one of the 2018 Jefferson-Shelby Hoops Classic is officially in the books and it saw nine county teams compete. Of those nine, six were able to pick up a win in the first round as they advanced in the winner’s bracket of the tournament. While Oak Mountain had a bye, a full recap from all other girls teams competing as well as Wednesday’s schedule is listed below.

The Vincent girls got a strong defensive performance in the first round of the tournament as they improved above .500 on the season to 7-6. The Lady Jackets were led by 18 points from MaKayla Cohill and 10 from Aniya Norwood. Their next game will be Thursday at 6:30 p.m. against the winner of Montevallo/Corner.

Speaking of the Bulldogs, they continue to be one of the top teams in the county and the state after a 61-33 win over Fultondale. Montevallo (15-2, 1-0) was led by Lauryn Lilly with 20, Takila Hill with 18 and Alasha Reed with 11 as three players finished in double figures. The key to victory was a 23-6 second quarter. Montevallo’s next game is at 6:30 at Corner on Wednesday.

The Pelham girls basketball team has hit a strong stretch of play now having won two of its last three games against decent opponents. The Panthers made a run to the championship game of the Calera tournament the week before New Year’s and have now beaten Gardendale 47-40. Jamila Wilson paved the way with 16 points. The Panthers will take on Shades Valley at 5 p.m. at McAdory on Wednesday.

Just a few days after making the championship game of the Mortimer Jordan tournament, Briarwood got the privilege of taking on a very good McAdory team. The Lions were unable to come from behind as they fell 44-28. They’ll play again at 3:30 p.m. on Wednesday at McAdory in a loser’s bracket game.

It’s been a difficult season for Helena, but with a new year comes a new opportunity. The Huskies started off the second half of the season with a strong 60-48 win over Hueytown to improve to 6-10 overall. Helena will take on Minor at 3:30 p.m. on Wednesday at Calera High School.

The Thompson girls basketball team has arguably the second most talent in the county behind Spain Park, but that talent hasn’t transcended to a successful season in 2017-18 so far. In round one of the Jefferson-Shelby tournament, the Warriors were able to start off 2018 with a 58-46 win over Calera—something they hope will spark a strong second half of the season.

Thompson improved to 5-10 on the season and advanced in the winner’s bracket of the tournament where they’ll take on Center Point at Calera on Wednesday at 6:30 p.m. Calera will play again on Thursday at 3:30 p.m. in the loser’s bracket.

The Wildcats improved to 12-1 on the season with a strong 61-52 win over Pinson Valley. It was a game Shelby County should have won and they did just that against the Indians who are now 6-12. They’ll take on Oak Mountain at 6:30 p.m. on Wednesday at Oak Mountain.

Chelsea’s girls fell in a difficult matchup with Pleasant Grove by a final score of 70-52. The loss was in large part due to just 13 combined points in the first half, while Pleasant Grove picked up 31 points. The Spartans added 24 additional points in the third quarter to put the game out of reach. Michaella Edwards had 20 points and nine rebounds, while Hope Richard added 10 points.

Photos from day one available at Shelbycountyphotos.com

By ALEC ETHEREDGE | Sports Editor A total of seven teams opened up play in round one of the Jefferson-Shelby... read more