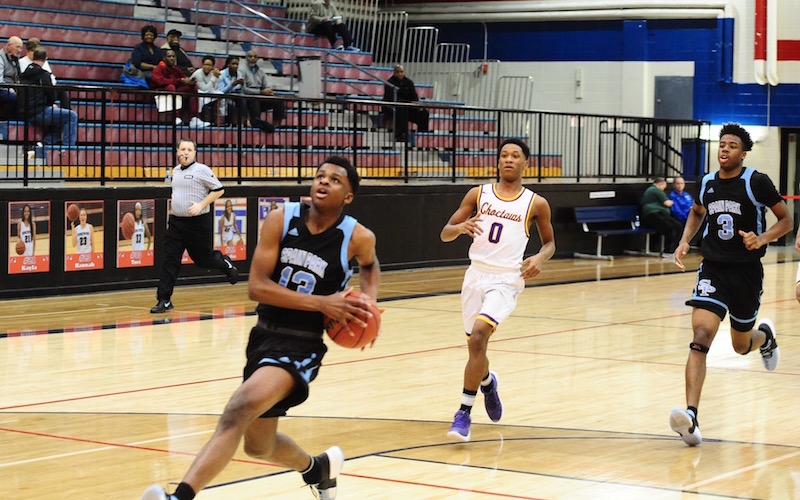 By SETH HAGAN | For the Reporter and ALEC ETHEREDGE | Sports Editor

HOMEWOOD – Spain Park hung tough to the very end, but the Woodlawn Colonels held off the Jaguars’ comeback on Friday, Dec. 29 to advance in the 2017 Metro Tournament, 51-48.

The Jaguars led for much of the first half as DayQuan Williams and Parker Boswell combined for 15 of the team’s 22 points in the opening periods.

Isaiah Gardner paced the Colonels in the first half with nine points and gave them their first lead when he converted a four-point play just before the end of the first quarter, 10-9.

Spain Park quickly took the lead back with a 6-0 run to start the second quarter and entered the bonus with 5:24 left.

However, they weren’t able to force many trips to the free throw line from there and, again, Woodlawn crept back into the lead with a 9-2 run of their own. The two teams scored 13 points apiece and the Colonels held another one-point lead going into halftime, 23-22.

The third quarter slowed down immensely as both teams found it hard to find the hoop combining for just five field goals.

The Jags and Colonels also combined for nine offensive rebounds, but what the two teams would do with their second chances would tell the story of the quarter.

Center Kellen Townsend was Woodlawn’s saving grace scoring six of the team’s eight points in the quarter, four of them off an offensive rebound.

The Colonels’ three offensive rebounds all led to points, but Spain Park was only able to score a single basket from their six offensive boards.

Still, the Jaguars only trailed 31-27 heading into the final frame. The fourth quarter quickly became a flight to the finish as the teams filled it up for 41 of the game’s 99 points.

Woodlawn’s D.J. Goodman took over scoring three baskets in a 12-3 run over the first four minutes as the Colonels slowly built their biggest lead. Then DayQuan Williams got hot again.

The guard scored three of Spain Park’s next four three pointers to finish with 22 points as the Jaguars closed in at 49-46.

The only problem was that D.J. Goodman also stayed hot and came up with a few key blocks down the stretch along with 14 of his team-high 18 points in the fourth.

Goodman put the game away with a three-point play opportunity that gave Woodlawn a comfortable two score lead, 51-46 with seconds remaining.

In the third place game, Spain Park squared off against Hartselle and were able to pick up a thrilling 56-55 win at the buzzer that could spark this team moving into the second half of the season.

The Jags were able to overcome an eight-point deficit early in the second quarter as well as at the half as they trailed 30-22 at the break.

With 6:38 remaining in the game, Hartselle led 46-40, but Spain Park was able to close the final 6:30 with 16 points, while limiting Hartselle to just nine points.

The win moved Spain Park to 5-9 on the season and completed a 2-1 record at the metro tournament to take home third place. It’s given the Jaguars some much needed momentum as they head into area play on Jan. 9.