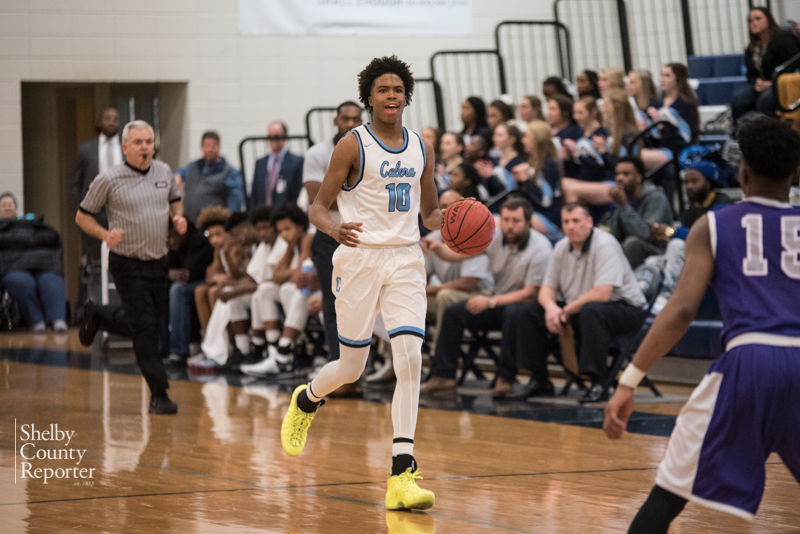 Cornelius Brown ended the night with 15 points for Calera as they picked up their 12th straight win. (Reporter photo/Keith McCoy)

CALERA – All good things must come to an end, but don’t tell the Calera Eagles’ boys basketball team that.

The Eagles have been on a tear of late on the hardwood winning 11 consecutive games. That unbelievable stretch continued on Wednesday, Jan. 3, when Calera held on for a 77-70 win over Minor in the second round of the Jefferson-Shelby Hoops Classic on its home floor to extend the win streak to 12 games.

At one point 1-3 on the season, Calera has now moved to 13-3 thanks to five players scoring in double figures against the Tigers.

One of those players kick started the Eagles’ night in the opening quarter as Jacob Smith posted 11 of his 15 points in the first. His 11 combined with five from Kevin Dowdell, four from CJ Smith and two from Quindarius Cotton gave Calera a strong 22-point first period.

It was only good enough for a three-point lead, however, as Minor got points from five different players in the quarter, including nine from A.J. Walker.

Leading 22-19, it was time for someone different to step up in the second quarter and it came by way of Tyler Millin. After being held scoreless in the opening period, Millin dropped 10 of Calera’s 18 points in the second quarter, despite going 0-5 from the free throw line.

That 18 points was good enough to extend the Eagles’ lead at the half as they outscored the Tigers by one point to take a 40-36 lead at the break.

Coming out of the break, Calera’s offense—which has been the hottest in the county this year—got right back to it posting 20 more points.

While the first two quarters saw Jacob Smith and Millin both carry the bulk of the load, it was a more balanced effort in the third. Four different players scored at least four points, while Cornelius Brown had seven to lead the way and Millin added six more to his total.

Minor was still playing well on the offensive end, but not good enough to keep up with the Eagles’ potent offense as they scored 17 for the second quarter in a row. Calera was able to extend its lead again as the Eagles took a 60-53 lead.

While Calera had its worst offensive quarter in the final period, the Eagles were still able to post 17 additional points, while they held Minor to 17 for the third consecutive quarter.

Calera went 9-12 at the free throw line down the stretch to seal the game and pick up the 77-70 win.

Calera advanced to the quarterfinals of the Jefferson-Shelby Hoops Classic where they will take on the 16-1 Helena Huskies with a trip to the semifinals on the line.