Helena takes down Hueytown in first round of JSHC 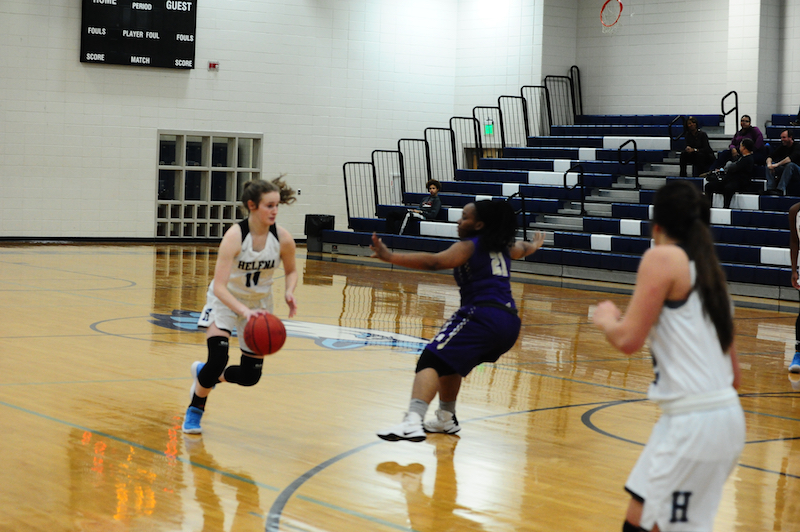 Helena took down Hueytown with relative ease on Jan. 2, in the first round of the Jefferson-Shelby Hoops Classic with a 60-48 win. (Reporter Photo/Graham Brooks)

CALERA–The Helena girls basketball team will advance to the second round of the Jefferson-Shelby Hoops Classic after taking care of Hueytown with a 60-48 win on Tuesday, Jan. 2, at Calera High School.

The Huskies led the entire way and despite some sloppiness to close out the game, Helena still managed a 12-point win on the final day of the holiday break.

Helena held a 13-7 lead at the end of the first quarter thanks to some hot outside shooting. Melanie Watson drained a pair of 3-pointers and Julia Hensley added another to account for nine of the 13 first quarter points.

The Huskies built on their lead in the second quarter as Jordan Jones accounted for 13 of Helena’s 20 points. Jones finished with 24 points to lead all scorers as Helena took a 33-22 lead into halftime.

Helena used several traps and backcourt pressure to convert defense into offense and in the end, it was enough for the first-round win.

Despite the win, Helena head coach Alan Skinner was critical of the way the Huskies closed out the game and said things will need to be cleaned up before their next game.

“Accountability is huge and it appears as though during a game we want to go say ‘Hey so-and-so get in there and rebound,’” Skinner said. “Well you’re standing there telling someone to go rebound so you go rebound too. Just little things like that. Not depending on other people to do your job and going in and doing what you’re supposed to do and just being a competitor.”

Hensley was the other Husky to finish in double figures with 12 points.

Helena will take on Minor on Jan. 3, at 3:30 p.m. in the second round of the Jefferson-Shelby Hoops Classic at Calera High School.