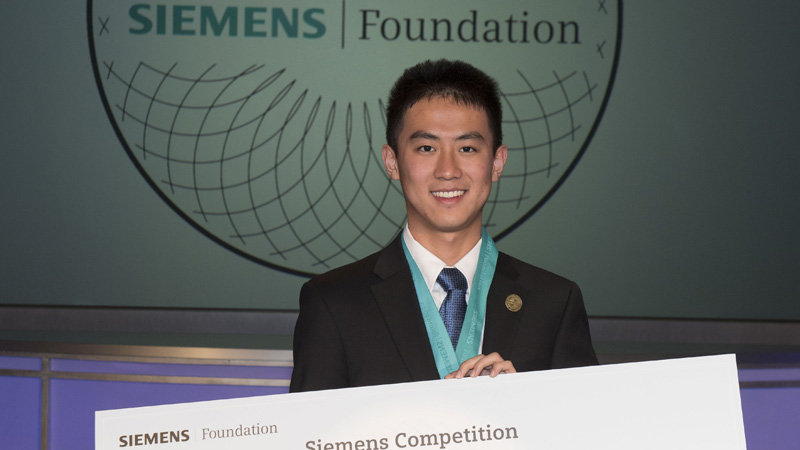 Kenneth Jiao won a $25,000 scholarship at the national finals of the 2017 Siemens Competition in Math, Science and Technology. (CONTRIBUTED)

INDIAN SPRINGS VILLAGE – Indian Springs School senior Ken Jiao won a $25,000 scholarship on Dec. 5, 2017, at the national finals of the 2017 Siemens Competition in Math, Science and Technology after earning top individual honors and an additional $3,000 scholarship at one of six regional competitions earlier this fall.

The prestigious competition, which was launched in 1999 by the Siemens Foundation, promotes student innovation and research by honoring individual and team research projects from across the country.

Jiao’s research project, entitled “Retain CHD7, an Epigenetic Regulator, in the Nucleus to Combat Breast Cancer Metastasis,” is shedding light on a potential way to determine if breast cancer cells are highly invasive, and how to inhibit them from spreading throughout the body.

“Kenneth’s research could bring scientists one step closer to developing a new biomarker for breast cancer metastasis and saving lives,” said regional competition judge Dr. Z. Jeffrey Chen, D.J. Sibley Centennial Professor of Molecular Biosciences at The University of Texas at Austin. “It’s rare to see this level of progress achieved in an independent project. Kenneth’s work is phenomenal, and could help reveal the underlying mechanisms in breast cancer metastasis.”

Jiao began his research as a 10th grader after his mother experienced a breast cancer scare. In May, he received third place grand prize in the category of Cellular and Molecular Biology at the 2017 Intel International Science and Engineering Fair in Los Angeles.

Springs is no stranger to Siemens honors. In 2007 and again in 2010, a Springs student was among the 100 students nationwide named a state winner of the Siemens Award for Advanced Placement in the student category.

In 2009, Springs was named one of only 50 schools in the nation—and the first independent school in Alabama—to earn a distinction for leading the state in AP Science and Math participation and performance.