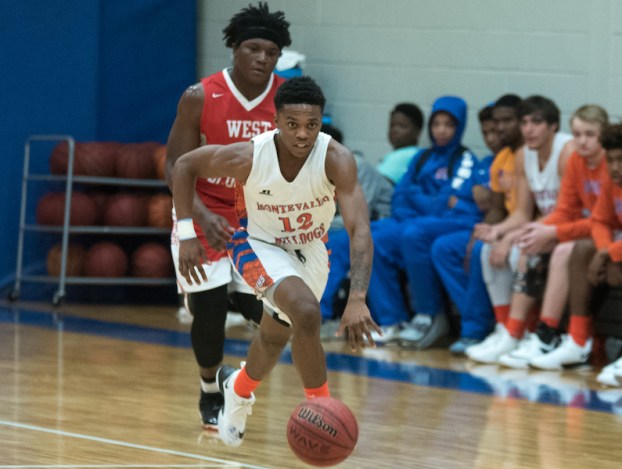 Montevallo's boys won their second game in as many nights to move above .500 on the season at 7-6 and advance to the quarterfinals of the Jefferson-Shelby Classic. (File)

CORNER – After strong first-round performances against Fultondale for both the Montevallo boys and girls basketball teams, each was back in action a night later against host Corner in the second round of the Jefferson-Shelby Hoops Classic on Wednesday, Jan. 3.

With the boys riding a high of beating a previously unbeaten Fultondale team and the girls sitting at 15-2 on the season in the midst of an incredible win streak, each continued to play with confidence to pick up a second straight win in the tournament.

The Lady Bulldogs (16-2) got 21 points from Alasha Reed and 20 from Lauryn Lilly to pick up a dominant 53-20 win over Corner, while the Montevallo boys (7-6) got another strong performance from Jamarcus Green as well as DonAnglo Evans to pick up a 59-47 win.

While the boys game was the more exciting of the two, it was the most inconsistent when it came to scoring as neither team played with much consistency.

Montevallo was, however, able to improve in each quarter going from nine points in the first quarter to 24 in the fourth to eventually run away with the win.

The first quarter was a defensive battle that saw the Bulldogs take a 9-4 advantage.

Corner bounced back in the second quarter as they kept up the defensive pressure, limiting Montevallo to just 10 points, but also found some rhythm offensively scoring 10 more points than the opening frame.

The Yellow Jackets were able to trim Montevallo’s lead to just one at 19-18 heading into the half.

Coming out of the halftime break, Montevallo was a different animal on the offensive side of the ball as the game became a bit more fast paced. The Bulldogs were able to put up a combined 40 points in the half thanks to 16 points in the third quarter and 24 in the final quarter.

Montevallo outscored Corner in each period to continue running away with the game until the final buzzer sounded with the Bulldogs ahead 59-47.

Green ended the night with 15 points to back up his 30-point performance from the night before. Evans had 15 points as well, going 4-5 from the 3-point line. In just his second game this season, and in as many nights, Daqwan Bryant added a third double-digit scorer with 10 points.

The boys will play Vincent in the quarterfinals at Corner High School on Thursday night at 8 p.m.

For the Lady Bulldogs, it was a strong effort from the opening tip to the end of the game that pulled them through.

The team continued to play lock down defense as they didn’t allow Corner to score more than seven points in any quarter and limited them to five or less in three of the four quarters.

Despite shooting just 5-12 at the free throw line, Montevallo was able to pour in a ton of buckets on the offensive end of the floor. Combined with the defensive effort it led to a 30-12 lead at the half and an easy 53-20 win in the end.

Aside from Reed and Lilly’s combined 41 points, Takila Hill added 10 points. The Lady Bulldogs will also play Vincent at Corner on Thursday at 6:30 p.m. in the quarterfinals.