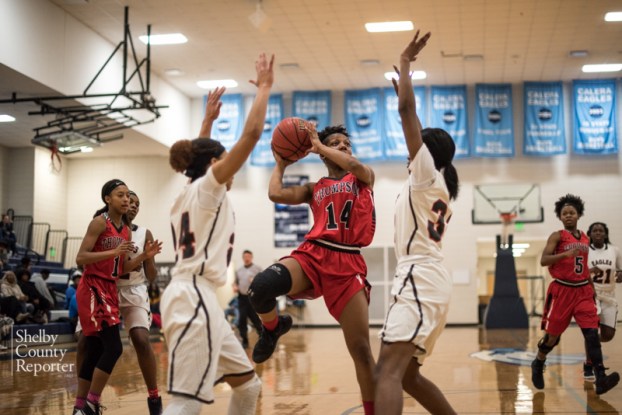 Niya Oden makes a move against a double team during a matchup with Center Point. She ended up posting a team-high 22 points to lead the Warriors to a 10-point win. (Reporter photo/Keith McCoy)

CALERA – Thompson’s girls took advantage of a depleted Center Point team on Wednesday, Jan. 3, to pick up their second consecutive win in the Jefferson-Shelby Classic at Calera High School.

The Warriors, now 6-10 on the season, started strong and went on to win 62-52 after taking advantage of a Center Point roster that featured just six dressed players.

With ShiCoriya Orr having fouled out in the final quarter and Kamron Williams having gotten injured earlier in the game, the Eagles were eventually forced to play with just four players in the final few minutes of the game.

It was something that killed a strong fourth-quarter run by Center Point and led to Thompson being able to hang on for the 10-point lead.

The Warriors couldn’t have asked for a better start to the game, however, as they came out in dominant fashion in the first half.

The defense also played aggressive in the first period limiting all but one player to no points. Kenjada Hutchinson’s six points were all the points Center Point was able to grab in the opening 8:00 of the game.

Thompson’s offense kept up the pressure in the second quarter as they either made a basket or got to the free throw line on seemingly every possession.

The Warriors ended up knocking down 9-of-11 free throw attempts in the quarter to put up 21 more points. After limiting the Eagles to just 14 points in the frame, Thompson had extended its lead to 40-20 at the half.

The halftime break seemed to kill all of Thompson’s momentum moving into the second half. The Warriors were only able to put up nine points in the third quarter.

The defense, however, did enough to still keep the Warriors ahead by a large margin moving to the fourth quarter as they limited Center Point to 12 points.

Leading 49-32, it was going to take a strong effort from the Eagles in the final frame.

Center Point gave it all they had, scoring 20 points in the quarter, while limiting Thompson to 13, but it wasn’t enough to overcome the large deficit as the Warriors held on for the 62-52 win.

Niya Oden led Thompson with 22 points, while Oden added 12 and Kahyanne Bolton added 10 to give the team three double-digit scorers. A total of eight different players scored in the win for Thompson. Taylor Henderson had a game-high 27 points for Center Point.

Thompson advanced to the semifinals of the tournament at Calera High School on Thursday at 6:30 p.m.

By ALEC ETHEREDGE | Sports Editor HOOVER – Thompson and Spain Park have had two of the strongest wrestling teams... read more