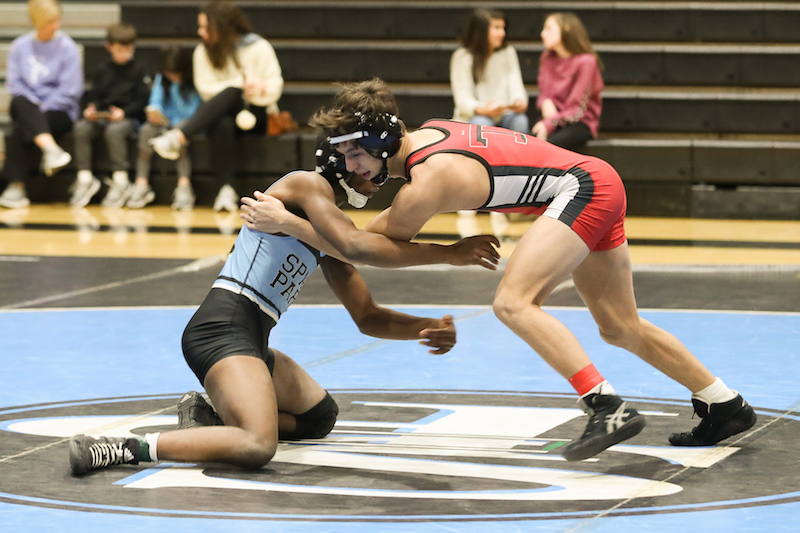 Emmanuel Thuo of Spain Park and Chandler Akin of Thompson compete in one of the more intense matches of the night. The Warriors went on to win a dominant performance overall, 66-9. (For the Reporter/Dawn Harrison)

HOOVER – Thompson and Spain Park have had two of the strongest wrestling teams so far during the 2017-18 season, but at times have been inconsistent depending on the level of varsity talent wrestling at each event.

The Warriors, however, have been dominant at times and showed that dominance again in a 66-9 region win on the mat on the road at Spain Park on Tuesday, Jan. 2.

All of those misfortunes led to forfeits and an automatic 24 points for Thompson, which put Spain Park behind the eight ball to start the match—a 24-0 deficit to be exact.

Starting off in the 106-pound weight class, Dylan Lesueur picked up a pin at the 3:01 mark to give the Warriors six more points. With forfeits in the next two weight classes, it gave Thompson sweeps in the first three classes and 18 points right off the bat.

The next matchup with no forfeit took place in the 126-pound division and featured two of the county’s best wrestlers in that weight class. The match didn’t disappoint either as Chandler Akin of Thompson was able to edge out Spain Park’s Emmanuel Thuo in a 5-2 decision for three more Warrior points.

Gabe Hixenbaugh picked up a pin against Caelean March in the 132-pound weight class, which gave Thompson six more points. The Warriors went on to get pins from Josiah Campbell (145), Ashunti Perry (152) and William Browder (160) in three of the next four matches as well as a forfeit win from Nathan Roberts.

That gave the Warriors nine consecutive matches with a win to kick off the match, which gave them a 51-0 lead. With just five matches left and one of those being a forfeit in the 182-pound weight class, Thompson had already sewn up the win.

Still though, Spain Park was able to avoid the shutout in its next match in the 170-pound division. Jacob Sharpe was able to pick up a 5-2 decision to give the Jaguars their first three points of the night.

Thompson picked up 12 more points in the next two matches with Alex Ward grabbing a forfeit win and Isaac McAdams picking up another pin for the Warriors in the 195-pound division.

Finally, in the 220-pound weight class from one of its best wrestlers, Spain Park was able to pick up a pin from Jaxon Best. At 17 seconds, Best was able to take down Aubrey Glidewell to give the Jags a total of nine points for the night.

In the final matchup, Seth Whitlock grabbed three more points over Cameron Young in an ultimate tie breaker to create the final score of 66-9.

The Warriors ended the night with 18 takedowns, while the Jags were only able to total two.