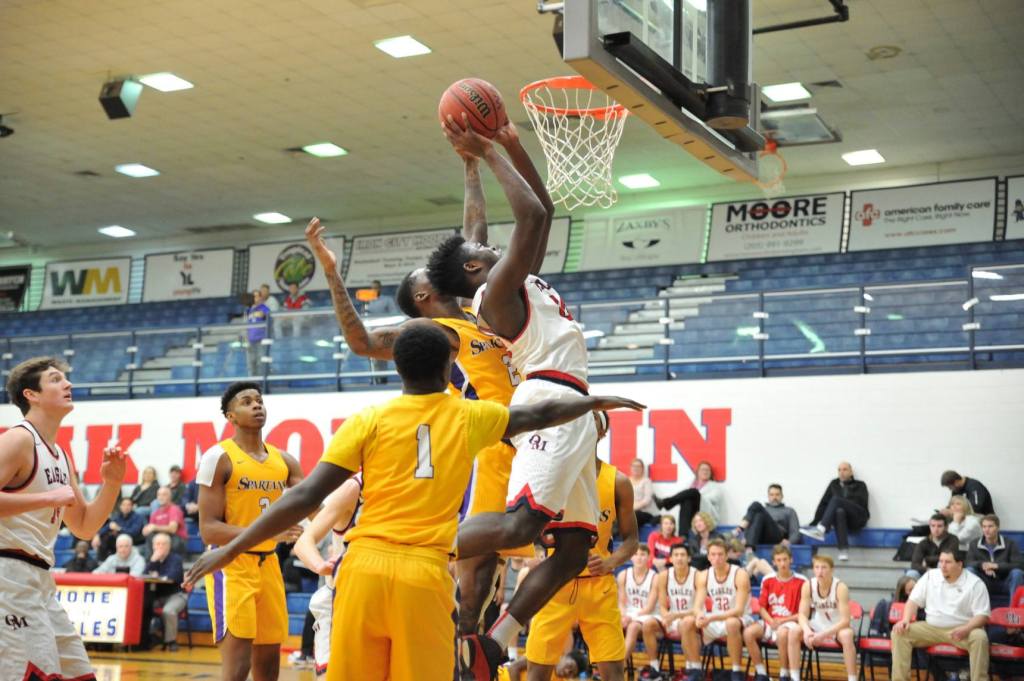 Oak Mountain made a valiant comeback effort against Pleasant Grove but ultimately fell 53-52. (For the Reporter/Larry Dancy)

NORTH SHELBY – A late push by Oak Mountain wasn’t enough in the second round of the Jefferson-Shelby Classic as the Eagles fell to Pleasant Grove 53-52 despite a furious fourth-quarter comeback.

Trailing the Spartans 47-36 entering the final period and unable to find an answer defensively, the Eagles faced an uphill battle.

That hill wasn’t too steep for Chris Mayweather, who scored six straight points and took two charges in the first 1:47 of the quarter to cut the lead to just five points at 47-42.

Pleasant Grove was able to put an end to the run on its next possession with a jumper, but Oak Mountain responded with back-to-back 3-pointers from Drew Dunn and Blake Hollingsworth to extend its run to 10-2 and cut the lead to just one point with 2:55 left in the game.

The Spartans eventually extend their lead back to four at 53-49 just before Hollingsworth hit another clutch 3-pointer with 1:20 left to play to trim the deficit back to one at 53-52.

Shortly after, Mayweather was able to grab a steal and go all the way to the basket before missing a go-ahead layup on the fast break with 55 seconds to play as he seemed to slightly trip on his way up.

The Eagles’ defense stepped up again, however, and got the ball back with 31.7 seconds remaining. Coming out of a timeout hoping to have the perfect play drawn up, Oak Mountain threw the ball away on the inbounds pass to give it back to Pleasant Grove with 16.7 left to play.

Oak Mountain forced one jump ball with just over eight seconds remaining. The ball stayed with the Spartans on the possession arrow.

On the next inbounds pass, the Eagles had seemingly tied the ball up again, but the officials awarded a timeout to Pleasant Grove instead of the jump ball, which upset Oak Mountain head coach Chris Love, thinking it should’ve been his team’s ball.

The Spartans were able to inbound the ball out of the timeout to run the final second off the clock to hang on for the win.

From the start of the game, you could tell Oak Mountain was going to have trouble on the defensive side of the floor as they got into a back-and-forth scoring battle in the opening quarter.

It was exciting to see, but much different than Oak Mountain’s typically slower-paced offense. It led to a 14-12 advantage for Pleasant Grove at the end of the first quarter.

That defensive struggle continued into the second quarter as the Spartans eventually went on a 9-0 run to take a 28-16 lead thanks to back-to-back 3-pointers.

Oak Mountain eventually cut into the lead thanks to two beautiful backdoor cut plays, but Pleasant Grove responded and took a 36-24 lead into the half.

The Spartans eventually extended that lead to 41-26, their largest of the game, to take control. Oak Mountain was able to make up some ground over the final two minutes to make the deficit more manageable heading into the final period.

The Eagles gave it their all in that final quarter, but just missed too many opportunities to pull off the complete comeback.

Oak Mountain is now 8-5 on the season.