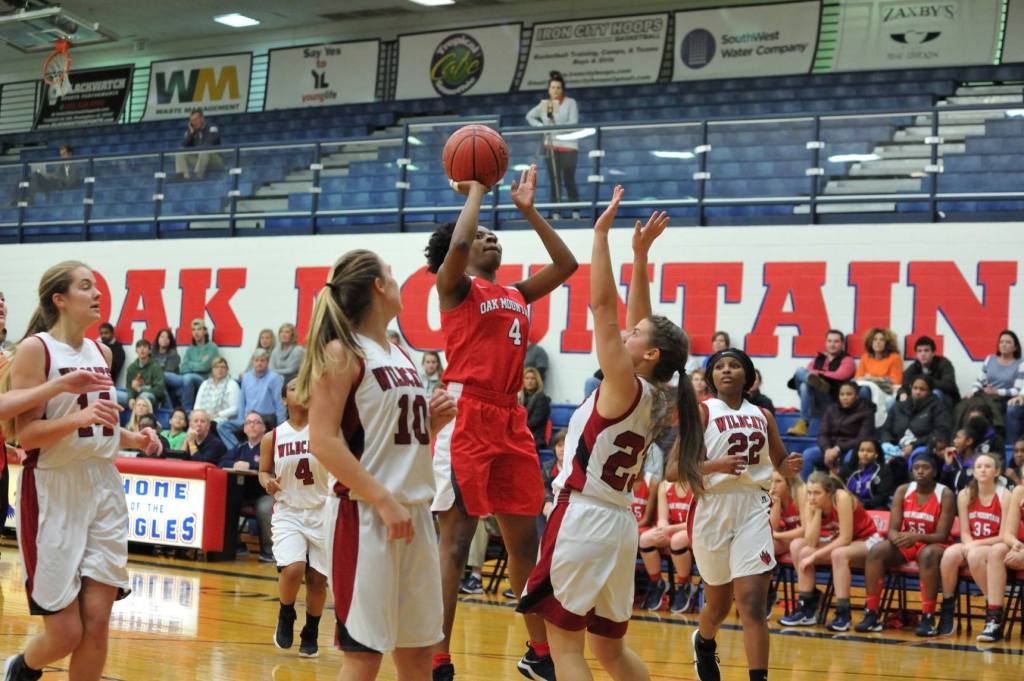 Kailey Rory hit the game-winning jump shot for Oak Mountain with 27.6 seconds left to take down Shelby County 41-39. (For the Reporter/Larry Dancy)

NORTH SHELBY – Oak Mountain found themselves down by 10 points early in the fourth quarter in a matchup of elite teams as they played host to the Shelby County Wildcats in a second-round matchup of the Jefferson-Shelby Hoops Classic on Wednesday, Jan. 3.

The Wildcats went on a 9-0 run to end the third quarter and start the final period, but the Eagles fought from behind and on a jumper just inside the free throw line from Kailey Rory with 27.6 seconds left, Oak Mountain was able to cap off a 17-5 run to end the game and pick up a 41-39 win.

The Eagles propelled into the quarterfinals of the tournament with the win and moved to 13-3 on the season, while Shelby County fell to 12-2.

Coming into the game with a combined record of 24-4, the two teams have been consistently two of the best in the county so far this season and it led to a thriller on the court.

While Oak Mountain ended the game strong, Shelby County kept themselves in the game thanks to Maggie West, who ended the night with a game-high 23 points.

In the midst of a 15-1 run by Oak Mountain and trailing 39-35, West hit a crucial 3-pointer with just over a minute left in the game and was fouled in the process. After making the free throw, she had tied the game at 39-39 in one possession.

Out of a timeout, however, on its next possession, Oak Mountain was able to get the exact shot it wanted from Rory to win the game.

While it was a strong offensive game in the second half, it was a defensive battle early in the first quarter with both teams struggling to find baskets.

Eventually the seal came off the basket and both started trading made shots for a closely contested quarter. That being said, there was a stretch later in the quarter where both missed easy layup opportunities and several shots in the paint.

With those struggles, both decided to shoot from beyond the arc in the final 30 seconds of the quarter and each drained a 3-pointer. It gave Oak Mountain an 11-9 advantage at the end of the opening quarter of play.

For the second quarter in a row the two teams struggled offensively for the first two minutes of the second period before Aaliyah Cotton of Shelby County hits 1-2 free throws with 6:02 left in the quarter to bring the Wildcats within one point at 11-10.

After Rory hit a 3-pointer to put the Eagles up 14-10, Maggie West answered with a 3-pointer for the Wildcats followed by a quick steal and layup to give Shelby County a 5-0 run and the lead at 15-14.

It didn’t last long, however, as Hannah Edwards grabbed an offensive rebound on Oak Mountain’s next possession to give them the lead right back.

Both went back and forth the rest of the quarter, which led to an 18-18 tie at the break after Edwards hit another layup with 15 seconds left, which was the last basket before the half.

Unlike the first two quarters, the two came out strong on the offensive end in the third. They combined for 13 points in the first 3:41 of the quarter as Shelby County grabbed the lead back at 25-24 midway through the quarter.

The Eagles had a chance to take lead twice, but turn the ball over on what would have been an easy layup by Rory and then miss two wide open layups on their next two possessions.

The Wildcats took advantage and ended the quarter on a 7-0 run capped off by an offensive rebound and put back at the buzzer by Madison Purcell to take a 32-24 lead into the final quarter of play.

Shelby County extended that run to 9-0 to start the fourth quarter as the Wildcats extended their lead to 10 at 34-24 before Oak Mountain ended the game on that 17-5 run.

The Eagles will play Clay-Chalkville at Chelsea on Thursday in the quarterfinals at 6:30 p.m.