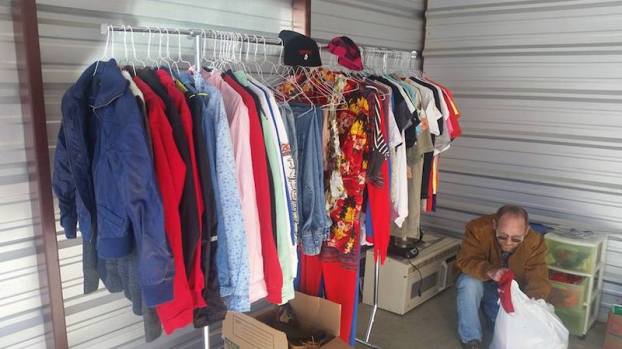 Alabaster Community Give Backers founder John Ellison has filled up several storage units full of items to donate to families in Shelby County who have been displaced as the result of a fire or natural disaster. (Contributed)

ALABASTER – For the past month and a half, John Ellison and a team of concerned locals, known as the Alabaster Community Give Backers, have been working to offer immediate help to Shelby County residents and newcomers who have been displaced by a fire or a natural disaster.

“It’s about giving back to people,” founder John Ellison said. “Especially in the case of a fire or a tornado or a flood.”

According to Ellison, the Give Backers provide for residents in need by filling storage units with donated items or items bought by the group. Families who are displaced can go through the storage units and take what they need. So far, Ellison said they have almost two storage units and will likely open a third soon.

“We’re just now getting off of our feet,” Trivett said. “Right now, we’re working on a mission statement and a plan of action.”

On top of going through the usual process of starting an organization, Ellison said the Give Backers have already helped several local families.

“We’ve already helped one family whose house burned down in Siluria,” Ellison said.

According to Ellison, the Give Backers began with a microwave donated by his brother.

“My brother, Barry Ellison, saw what I was doing in the community,” Ellison said. “He had a microwave he wasn’t using and he asked if there was anyone I knew who needed it. It just went from there.”

As a newcomer, member Christy Conklin said she was drawn to the group after she was forced to evacuate her old home and move to Shelby County after a natural disaster. Because she knows what it is like to lose a home, Conklin said she felt motivated to find ways to help others in that position.

On top of Ellison founding the Alabaster Community Give Backers, Trivett said he is well known for his public service works in the community. Last year, Ellison founded the Alabaster Public Servants Foundation and has regularly been seen picking up litter on the side of the city’s roads on top of maintaining a full-time job.  Trivett said his help has extended to her family and many others in the community.

“He’s always asking if (my daughter) Bella needs anything. He is such a blessing,” Trivett said.

Since word got out about the group, Trivett and Ellison said they have attracted the attention of people as far away as Trussville.

“I’m hoping that this will spread to other communities, and they will do the same thing,” Ellison.

Currently the Give Backers consist of six members: Ellison, Trivett, Conklin, Rodgers, Jamie Olliff and Linda Lowden. While the group is working on creating a website, Ellison said the best way to find more information about the Give Backers for now is to visit the “Alabaster Community Give Backers” Facebook page.

By NEAL WAGNER / Managing Editor ALABASTER – Crews are in the process of removing thousands of used garbage cans being... read more