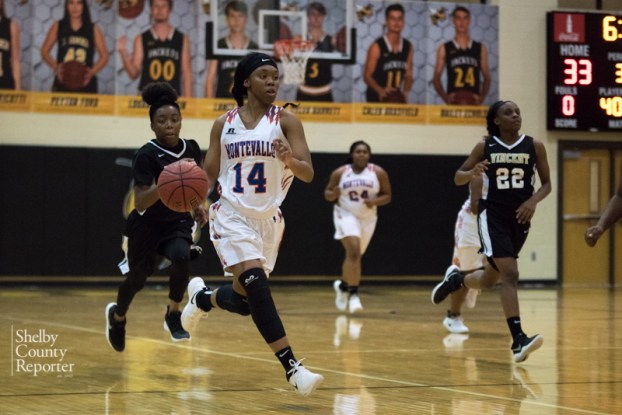 The Montevallo girls basketball team continued its dominant ways with a win over Vincent to advance to the semifinals of the Jefferson-Shelby Hoops Classic. (Reporter photo/Keith McCoy)

WARRIOR – The Montevallo girls basketball team put the finishing touches on their sweep through the first three rounds of the Jefferson-Shelby Hoops Classic and advanced Thursday night, Jan. 4, with a dominant 44-19 win over the Vincent Yellow Jackets (7-7).

The Bulldogs improved their record to 17-2 and, according to head coach Tena Niven, came into this game with a better mindset than their previous tournament games.

“I think they came a little more prepared than we did the first two nights here,” she said of the effort. “I think we started a little bit faster tonight, more ready with our pressure defense.”

Vincent couldn’t stand up to the Bulldogs’ barrage of pressure and it showed.

Time and again Montevallo forced the Yellow Jackets into uncomfortable situations as they pressed at different levels throughout the first half.

As a result, Vincent turned the ball over 15 times in the first half and the Bulldogs quickly put the game out of reach.

Lauryn Lilly lead the Bulldogs with 16 points and scored 10 of them in the first half as Montevallo built a 31-6 lead that wasn’t relinquished. Tekay Hill scored all eight of her points in the first half and finished with double digit rebounds, and Montevallo again controlled the boards on the offensive and defensive ends of the court.

The third quarter brought more of the same and while the Yellow Jackets found the basket as many times as they had the entire second quarter, it wasn’t near enough to stop Montevallo from enforcing its will.

Alasha Reed and Lilly each scored six points apiece in the quarter as the Bulldogs stretched their lead to 44-12.

Montevallo forced 21 turnovers before the 4th quarter had even begun.

“We were able to work on our zone defense, which we don’t play a lot, but we know we’ll need to in the future,” Niven said. “So it gave us some opportunities to do some new things. Going this many days in a row when you don’t have practice you don’t have a lot of time to adjust and so I thought we adjusted on some things that we really needed to work on while we were out there.”

Montevallo will play the Shades Valley Mounties in the tournament semifinals at McAdory High School Friday at 6:30 p.m.

By SETH HAGAN | For the Reporter WARRIOR – Montevallo’s midseason upswing continued as the Bulldogs took their sixth win in... read more