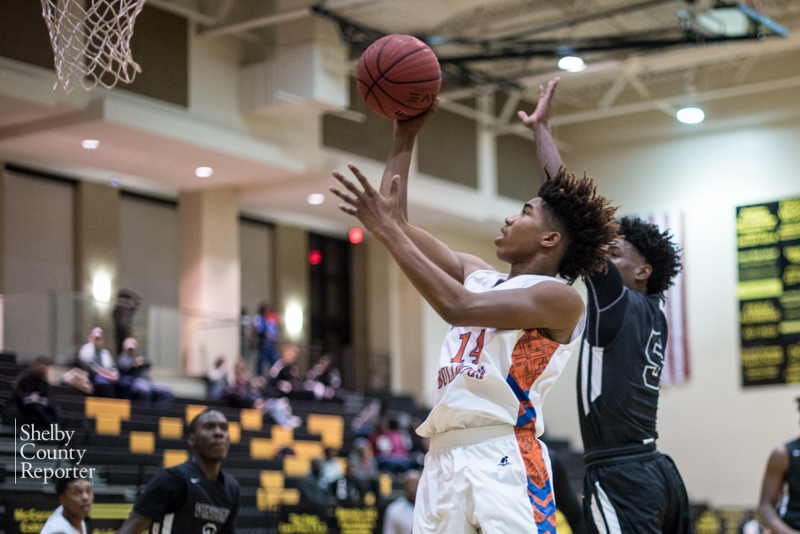 Montevallo's basketball team pulled off a strong comeback to win its third game in a row and advance to the semifinals of the Jefferson-Shelby Hoops Classic. (Reporter photo/Keith McCoy)

WARRIOR – Montevallo’s midseason upswing continued as the Bulldogs took their sixth win in the last seven games, including the first three of the Jefferson-Shelby Hoops Classic.

The boys trailed almost the entire game, but used a furious rally in the final quarter to steal one from a county foe in the Vincent Yellow Jackets in a defensive struggle, 33-30.

The first half of this one found both teams closing down the paint on defense using zones to force shots from the perimeter.

Montevallo didn’t make a basket until 2:42 left in the first quarter when JaBrian Sullens found the cup for the team’s only field goal of the opening period. Vincent also found life on the outside challenging and held a small 6-2 lead after the first quarter.

Montevallo needed a spark and they found it in Daqwan Bryant who came off the bench to hit two big three pointers to keep the Bulldogs close.

“Actually, he does that for us all the time,” Montevallo head coach Greg Dickinson said. “He’s that guy to come off the bench, he can knock down those big shots that we need when we’re down and can’t get a bucket. He’s shooting about 45% from three so we know we can count on him when we run our set plays.”

The Yellow Jackets’ lack of luck continued outside of Jackson McGinnis and Chris Hardie who scored all 10 of the team’s first half points. The teams entered the half tied 10-10.

The second half started off much faster as Vincent finally found its touch from long distance hitting two threes of its own as part of a 10-1 run to take a 20-11 lead.

The teams traded baskets to end the quarter, but Montevallo’s leading scorer Jamarcus Green got his first bucket of the game, which seemed to be a foreshadowing of success for the Bulldogs entering the final period.

Down 22-16 to start the quarter, Green quickly scored his second field goal of the night, but the Yellow Jackets answered with three more of their own to take their only double digit lead of the night at 28-18.

Down big, Green was forced to turn up the heat on both ends of the court.

“He was playing nonchalant, so we told him ‘if we’re going to win this game it would have to be through you,’” Dickinson said. “He turned it up, started pushing the ball faster, turning the defense up and putting guys in the right spot and it worked out for us.”

Montevallo went on to turn Vincent over seven times in the fourth quarter as the Bulldogs extended their full court press. The extra possessions quickly turned to baskets as Green scored 12 of the Bulldogs’ next 14 points.

After going down 10, MHS outscored the Yellow Jackets 15-2 the remainder of the way.

Bryant sealed the game by sinking four straight free throws to put the game out of reach at 33-28.

The win advances Montevallo to the semifinals of the Jefferson-Shelby Hoops Classic where they will square off with the Shades Valley Mounties Friday at 8 p.m. for a shot at the tournament finals.