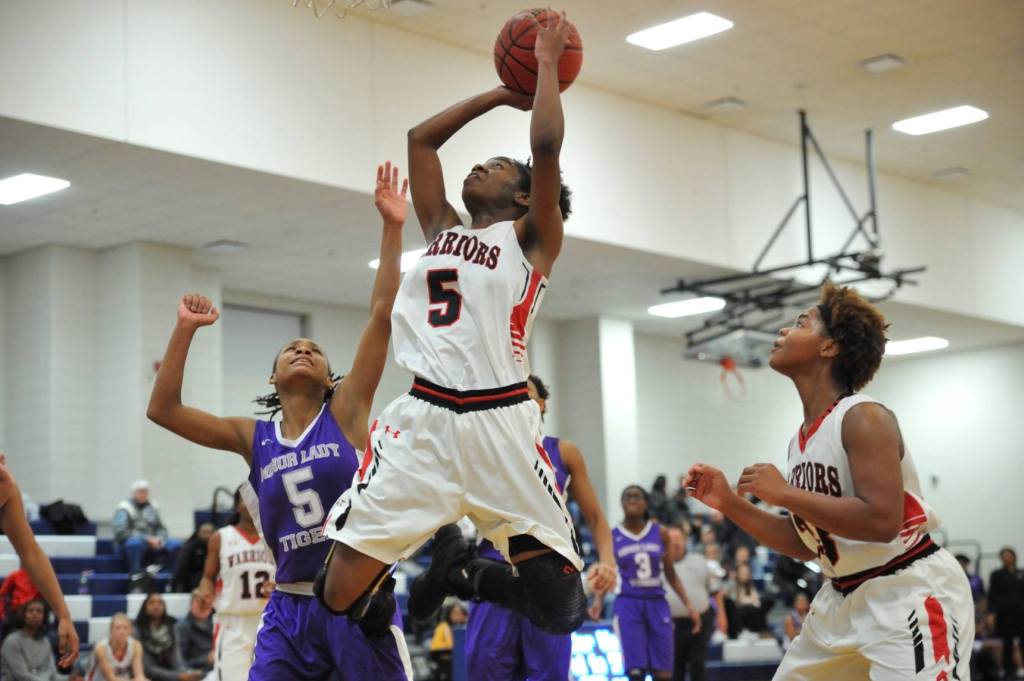 Kahyanne Bolton had a strong game for Thompson in the quarterfinals, but turnovers by the Warriors eventually cost them a chance at the win. (For the Reporter/Larry Dancy)

CALERA – Thompson was looking for a first this season when it took to the floor on Thursday, Jan. 4, at Calera High School in a quarterfinal game with the Minor Tigers—a three-game win streak.

The Warriors, who have struggled for much of the season, strung together wins in their first two games of the Jefferson-Shelby Hoops Classic and were looking for a third in a row to advance to the semifinals.

Turnovers, however, had something else in mind for Thompson’s fate. The Warriors turned the ball over 15 times in the first half and then five consecutive times to end the game to lose a tightly contested game 47-39.

Despite trailing by as many as eight points in the second half, the Warriors were able to battle back to take a 39-38 lead with just over a minute to play when Brooklyn Oden knocked down a 3-pointer.

That’s when Thompson turned the ball over five times in a row, which led to a 9-0 run over the final minute of the game for Minor to pick up the 47-39 win.

The game started the way it ended for Thompson, but despite 15 turnovers in the first half, the Warriors were able to keep the game close at the halftime break thanks in large part to Kahyanne Bolton.

Thompson’s struggles holding on to the ball started in the opening quarter as Minor’s 3-2 zone caused fits for the Warriors. They were unable to penetrate the zone and turned the ball over with some bad pass attempts on several occasions.

While the Warriors gave the ball up eight times in the quarter, they were still able to play solid enough on the defensive end of the floor to play unbelievably to an 8-8 tie at the end of the period.

Bolton had six of the eight points for Thompson in the quarter to keep her team fighting in the early going.

The turnover bug continued into the early part of the second quarter for Thompson as they eventually accumulated seven more and 15 total in the half.

It led to the Tigers going on a 9-0 run and taking a 17-8 lead. Eventually, the Warriors were able to give Minor a taste of its own medicine by forcing them into several turnovers as Thompson ended the quarter on a 6-0 run to cut the deficit to just three points, 17-14, at the half.

Thompson played much cleaner in the second half, specifically in the third quarter, when it came to turnovers, but Minor was able to extend its lead to five at the end of the period.

Trailing 30-25 heading to the fourth, Thompson was able to turn up the offensive intensity in the final quarter.

Both teams battled back and forth over the next few minutes of the fourth quarter before Thompson eventually grabbed the lead on that Brooklyn Oden 3-pointer.

Had it not been for those turnovers, the momentum was completely in the favor of the Warriors, but Minor’s pressure became too much over the final minute of the game as the Tiger’s scrappiness led them to victory.