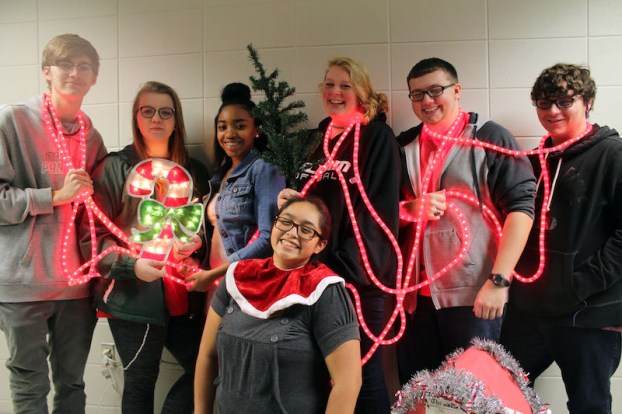 PHS world-changers celebrate the spirit of the holidays and reflecting on who we truly want to be including Louie Smith, Madison Lewis, Tambrianna Smith, Lupita Aguilar, Lexi Thompson, Nate Padgett and Kaleb Hinds. (Contributed)

This year, Macy’s announced a gift of over $2 million to the Make-A-Wish Foundation resulting from the Believe campaign. This partnership with Make-A-Wish prompted me to start the assignment years ago. Having students served by the foundation underscores that each letter leads to wishes fulfilled for families dealing with life-threatening illnesses.

Introducing students to Macy’s Believe Campaign with a few short videos about the program, I assign writing letters to Santa. For the past few years, I’ve considered forgoing the Santa letters. After all, these students range in age from 14-18. What do they really have to say to Santa? The assignment allows asking only for intangibles. Perhaps that’s why it continues. Asking for intangibles requires writers to consider needs that are unseen—and believe that those needs might be met.

Requests this year include “the power to be loved unconditionally,” “the ability to wear confidence as easily as I wear any other item” and, this year’s most poignant request that “we should all accept each other for who we are” regardless of skin color or cultural differences.

The student making this request entered a store later than her family members. With her confidence, impeccable English and fair complexion, my student experienced immediate customer service when her darker, Spanish-speaking family members were ignored.

Are high school students asking for the impossible? Loving unconditionally, building confidence in our youth and being courageous enough to treat others with kindness and respect—even those who are different from us—are worthwhile reflections for those on the cusp of adulthood. I still believe that inspired, courageous people—who are both reflective and proactive—can change the world. My blessing is teaching those people.