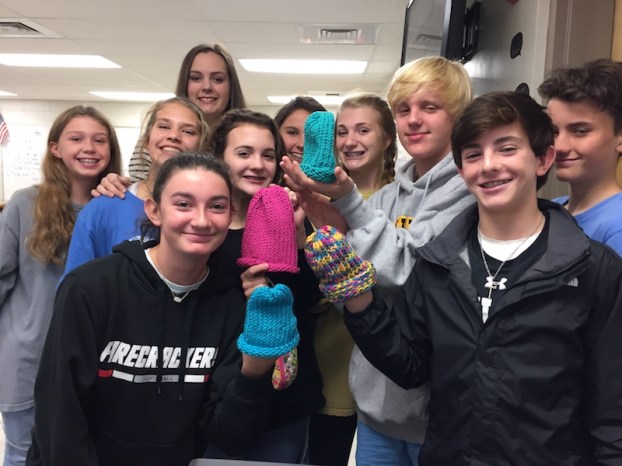 ChMS art students spent the five weeks before school got out for the holidays knitting hats for patients at Children's Hospital. (Contributed)

CHELSEA – Eighth graders in Chelsea Middle School teacher Katy Thompson’s art classes recently found a way to use their art to help those in need.

During the five weeks before school let out for the holidays, Thompson said all three of her eighth-grade classes knitted hats for patients at Children’s Hospital. She delivered a total of 55 hats in various sizes for infants, children and teenagers.

“Each year, we do a weaving project. I thought that, instead of just weaving on a cardboard loom, we would use this project to help other people,” Thompson said. “(My students) were extremely excited about learning to knit and the fact that they were donating to Children’s.”

“We used different colored yarns and made them in all different sizes,” eighth grader Samantha Kennedy said.

About five or six years ago, Thompson said her daughter was frequently at Children’s because of a blood disorder. She said the experience was eye-opening and gave her a newfound appreciation of the staff and patients at Children’s.

“I was so grateful to live in a city that had those services, and I wanted to give back,” Thompson said.

Samantha said she especially enjoyed learning about knitting and will likely knit more hats to donate. She has since taken it up as a hobby and received a loom for Christmas.

“I made a variety of hats. They were mainly young adult sized,” Samantha said. “My favorite part was being able to learn to make them, because it was really fun, and now I can use it to make hats for other people.”

Chelsea resident Bragan Feldman announced her candidacy for Place 1 on the Shelby County School Board of Education, as of... read more