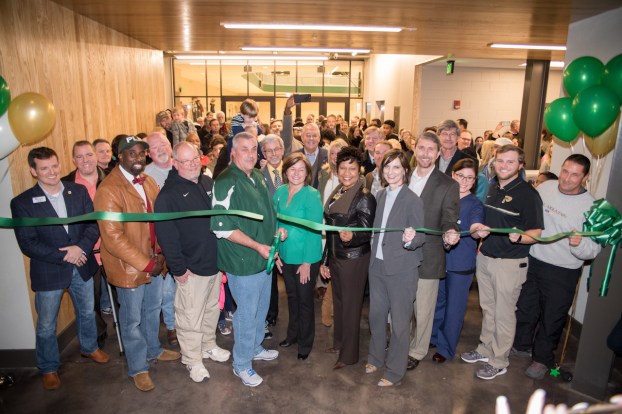 The city of Pelham hosted a ribbon cutting for the recreation center on Friday, Jan. 5. (Reporter photo/Keith McCoy)

The Pelham City Council, school board members and other city leaders showed up to celebrate the opening of the center. The construction of Pelham’s two-story recreation center, which cost roughly $6 million, began Jan. 25, 2017.

Blalock Building Company was awarded the bid to construct the facility.

During the ribbon cutting, City Councilwoman Beth McMillan said she is glad the Pelham community has somewhere to come together and hang out.

“It’s a great addition to the city,” she said. “It offers so much. This facility has something that appeals to everyone in the family.”

City Councilwoman Mildred Lanier said it was exciting to see so many people out for the ribbon cutting.

“I’m looking forward to people enjoying what is theirs,” Lanier said.

Resident Jimmy Mann said he is excited about the facility.

“They’re doing a lot of good things here,” Mann said. “In the past few years the city has really grown.”

Mann said he is looking forward to watching his son, Jay, play youth basketball at the facility.

“His team will be playing their first game on Wednesday playing Calera,” he said. “So far our team is undefeated. Hopefully we can keep the winning streak going.”

Resident Mary Lynn Porter said the facility is nice but she did expect it to be bigger.

“It’s really pretty but I thought it’d be a little bigger,” she said. “I know they have some other things planned like a dog park, the trails and outdoor courts – so once they get finished building everything out I think it’ll be a really great area.”

After the ribbon cutting, two Pelham youth basketball teams were the first to play games at the facility.

The 38,000-square-foot rec center is free to the public for the month of January to give residents a chance to see what all the facility has to offer. This offer does not include the exercise classes offered at the facility.

Hours of operation for the rec center will be 7 a.m. to 9 p.m. Monday through Saturday and 1-6 p.m. on Sundays.

There have been discussions among the City Council and Parks and Rec Director Billy Crandall about granting membership to those who live outside of Pelham but work in the city.

There have also been discussions about offering middle school students who are members at the rec center and are 14-years-old the opportunity to walk over to the facility after school. Right now, the school only has pickup or bus riding options for students.

However, no final decisions have been made on either of the matters.

By NEAL WAGNER / Managing Editor A pair of companies are set to break ground this week on a... read more