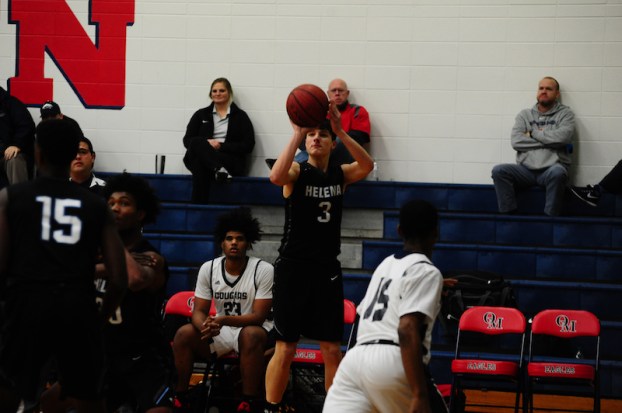 Helena’s Austin Laatsch (3) knocks down one of his five 3-pointers in a win against Clay-Chalkville on Friday, Jan. 5. (Reporter Photo/Graham Brooks)

For the second straight season, the Helena Huskies boys basketball team returned to the finals of the Jefferson-Shelby Hoops Classic as they faced numerous challenges to get back to the final game on Saturday, Jan. 6.

The Helena Huskies came onto the floor at Oak Mountain High School for a semifinal matchup against Clay-Chalkville and looked right at home on Friday, Jan. 5.

The Huskies began the game with three straight 3-pointers from Nate Andrews, Justin Stuckey and Dionte Tolbert to take a 9-0 lead and never looked back to cruise to a 64-19 win over the Cougars.

Six different players combined to drain 12 shots from beyond the arc for the Huskies that accounted for 36 of the 64 total points.

Helena’s Austin Laatsch led the way for Helena finishing with 16 points to lead all scorers. All of Laatsch’s points came from beyond the arc including a successful 4-point play after being fouled on one 3-point attempt.

“We have a lot of guys that can make the three and we thought we would kind of shoot it that way all year,” Helena head coach Chris Laatsch said after the game. “We started the year shooting it that way and have not shot it as well lately. I think our first three buckets were all threes by three different guys and they were all late in the possession after we had swung the ball to get great shots.”

The win over the Cougars improved Helena’s record to 18-1 on the season and set up a return trip to the championship game of the Jefferson-Shelby Hoops Classic.

The championship game of the Jefferson-Shelby Hoops Classic featured a familiar matchup on Jan. 6.

The Helena Huskies and Shades Valley Mounties met for the second straight year in the finals as the Mounties tried to avenge the loss from the previous year.

For the better part of three quarters, it seemed as though the Huskies would win the title for the second year in a row, but a 31-18 run in the second half helped Shades Valley complete a 44-39 comeback win.

The first quarter was an entertaining back-and-forth battle that ended with Shades Valley leading 11-9 after the first eight minutes. Helena’s Justin Stuckey had five of his eight total points in the first quarter.

In the second half, the script was flipped as Helena had a tough time score baskets while Shades Valley had its best success offensively.

Desmond Trotter and Antonio Thomas were both held to single digits in scoring in the first half but both caught first in the second half to help lead the Mounties to the title.

Helena had a chance to send the game to overtime in the final seconds of the game but couldn’t convert. Trailing 42-39 with 10 seconds remaining, Helena had one final shot but Stuckey’s 3-pointer came up short and Wiley calmly sank two free throws at the other end to seal the 44-39 victory.