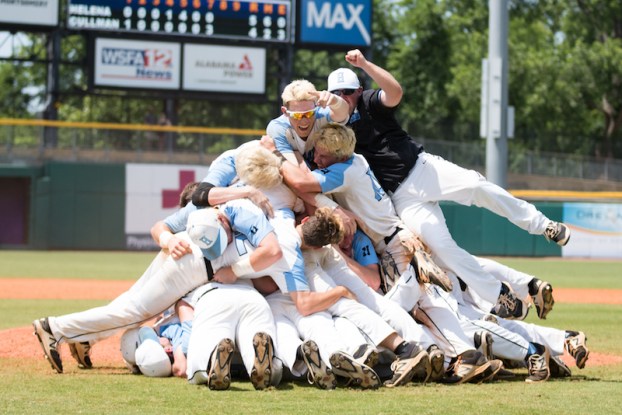 The biggest headlines in Helena sports January through December

As the new year begins, we take a look back at Helena’s biggest sports headlines in 2017

Helena flexed its muscles to start area play by defeating rival Pelham 58-24 at home on Jan. 10.

With less than one minute to play in regulation, the likelihood of Helena finishing 4-0 in area play became slimmer and slimmer with each tick off the clock, but in the end, the Lady Huskies dug deep and pulled out an incredible 64-55 overtime win against Chelsea on Jan. 27.

The Helena Huskies are the inaugural champions of the Jefferson-Shelby Hoops Classic after taking down Shades Valley 54-38 in the championship game on Saturday, Feb. 4 at Helena High School.

A solid final quarter that saw the Lady Huskies outscore Chelsea 25-17 helped Helena lock up the Class 6A Area 8 Championship on Friday, Feb. 10 defeating the Lady Hornets 60-51 to finish with an unblemished record in area play on the season.

Helena High School sophomore Kirsen Gardner came away a state champion at the 48th AHSAA State Indoor Track Championships at the Birmingham Crossplex on Saturday, Feb. 4. With a throw of 39 feet 3 inches or 11.96 meters, Gardner won the girl’s 6A individual shot put championship by a wide margin.

The Helena Lady Huskies punched their ticket to Montgomery. Helena needed a win over Bryant on Feb. 13, in the Sub-Regional round of the girls 6A state tournament to advance and they did so in impressive fashion to defeat the Stampede 56-43 in a game in which Helena never trailed.

the Helena Huskies baseball team opened the 2017 season on Monday, Feb. 20, in a new classification and a renewed focus as they began their first season in the 6A classification. They defeated Hoover 4-2 and Florence 3-1 to open the season on a high note.

The Helena Huskies softball team had to wait an extra two days to play their season opener after the Feb. 21 scheduled opener was cancelled due to rain and they came away with a 4-1 win at home over Hewitt-Trussville on Feb. 23.

The Helena Huskies girls soccer team hit the road on Monday, Feb. 27, in search of their first win of the season as they took on the Sipsey Valley Bears from the 4A classification.

Both the Helena and Chelsea boys soccer teams wanted to get off to a good start in the first area game of the season on Wednesday, March 8, and in a game that Chelsea controlled early, the Huskies were able to fight back for a 4-3 win.

The Helena Huskies baseball team was seeking their 10th win of the season and ironically on Wednesday, March 15, the Huskies 10-run ruled Hoover to defeat the Bucs 11-1 in five innings.

The teams faced off three times in three days and it was the Huskies who took all three games over their rival to move to 3-0 in area play. Helena won the first meeting by a score of 7-2 on March 21, followed up with a 9-2 win and a 12-2 win in a double-header on March 23.

After weeks of playing non-area opponents, the Helena Huskies softball team got their first crack at rival Pelham in their first area game of the season on Tuesday, March 22, and they took full advantage of the opportunity, shutting out the Panthers 7-0.

Helena’s Jordan Jones led the Huskies to an appearance in the Sweet 16 after having one of the strongest seasons in the county averaging 17.4 points per game.

The Helena Huskies boys golf team competed in the Good Hope Golf Invitational and came away as tournament champions on Monday, March 20, at the Terri Pines Country Club in Cullman.

MaxPreps, a national website which focuses on information, recruiting, news, video and discussion about high school sports, has Helena ranked No. 1 nationally in its latest computer rankings released on April 4.

After putting together seven consecutive wins in a tournament that featured eight teams, five of which were ranked, Helena won the 2017 Buccaneer Classic to improve to an incredible 23-4 on the season.

Incredibly, Helena finished with a perfect 6-0 record to finish as the Class 6A Area 8 regular season champion. The Huskies swept rival Pelham earlier in the season and swept Chelsea the week of April 10 to finish on top.

After defeating Chelsea on April 19, Helena finished with four area wins and zero losses in the regular season.

The HMS softball team blew through the competition en route to a 34-1 overall record and a league championship as they broke several records along the way in the historic season.

The Helena High School softball team looked to finish strong on Monday, April 24, as the Huskies played their final regular season home game against Leeds on senior night. It ended up being a memorable night, as Helena shut-out Leeds by a score of 10-0 behind Meagan Mooney’s no-hitter.

On Wednesday, April 26, Beery signed a scholarship with Huntingdon College to continue his academic and athletic career.

It took just two wins for the Helena Huskies to capture the 2017 Class 6A Area 8 softball championship as they started the postseason with a bang. The Huskies downed the Hornets 4-2 on May 2.

Helena fought to sweep defending 6A state champion Hillcrest-Tuscaloosa in a pair of tight extra-inning games in the AHSAA Class 6A semifinals. the Huskies won game one 2-1 in eight innings and game two 5-2 in nine innings to set up a trip to Montgomery for the state championship game.

The Helena Huskies softball team is heading to the AHSAA 6A State Softball tournament for the first time after finishing as a qualifier in the South Central Regional tournament in Troy. Helena won three out of four games in the regional tournament to advance to Montgomery.

Gardner is now a two-time state champion after winning an individual shot put championship at the 93rd AHSAA State Outdoor Track Championships on Friday, May 5.

Helena needed every bit of the four run lead as Cullman was close to tying or winning the title with one swing of the bat in game three but the Huskies held on for the 5-4 win. Helena was pounded 9-1 in an error-filled game one on May 18, but came back and swept both games on Friday by scores of 3-2 and 5-4 to win its first baseball state championship. Helena starting pitcher Troy Cordrey was named MVP after pitching a three-hit complete game in game two.

MaxPreps, a national website which focuses on information, recruiting, news, video and discussion about high school sports, has Helena ranked No. 1 nationally in its latest computer rankings and No. 10 in the Xcellent 25 National High School Baseball rankings released May 22-23.

there was one name, that separated itself from the rest of the pack down the stretch; Helena’s P.J. Guy. In just three years, Guy has helped lead Helena to the state championship twice. That’s not just Guy’s first three years at the helm, but also the first three years of the school’s existence making his lightning quick establishment of a dynasty impressive.

Helena’s Avery Barnett and Katie Lively were both named to the ASWA All-State softball team at the 6A level.

‘Husky Day’ gives fans a glimpse of what’s to come

A stellar defensive performance and solid offensive play helped lead Helena to its first region win of the season as the Huskies defeated Chilton County 20-0 on Friday, Sept. 8, at Husky Stadium.

The Huskies began area play on Sept. 14, where they made quick work of the visiting Chelsea Hornets. Helena defeated Chelsea in straight sets 25-18, 25-18 and 25-11 to grab an early lead in the area standings.

Helena volleyball digs in for Elite 8

The Helena Huskies volleyball team swept both G.W. Carver and Wetumpka in the AHSAA 6A South Super Regional and will advance to the Elite 8.

After three strong seasons manning different positions in the outfield for the Helena Huskies softball team, senior outfielder Katie Lively has officially inked a scholarship to play softball for Troy University upon graduation.

Helena High School varsity head football coach Watt Parker will not return for the 2018 season. In four seasons, Parker compiled an overall record of 18-25 and 13-13 in region play. The Huskies had two playoff appearances in four seasons.

Landon Green signed with the University of Alabama, Richard Fitts signed with Auburn University and Nick Ragsdale signed with Shelton State Community College as coaches, teammates and family members packed the Helena Sports Complex to celebrate their accomplishments on Nov. 9.

Helena High School head basketball coach Chris Laatsch was honored by administrators at HHS in a pregame ceremony for picking up his 350th career victory on Nov. 20.