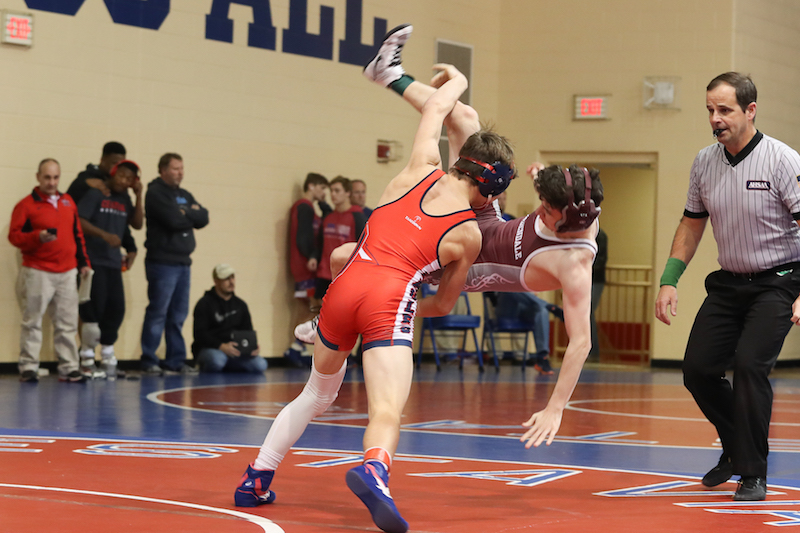 Oak Mountain's Cole Thomas was one of three champions from the county. Two of those champions were from Oak Mountain, while Nathan Dunaway grabbed a win for Helena. (For the Reporter/Dawn Harrison)

HOOVER – A total of 32 wrestling teams—22 from Alabama, seven from Florida, two from Louisiana and one from Georgia—took to the mat in Hoover on Friday, Jan. 5, and Saturday, Jan. 6, to take part in the 2018 Scott Rohrer Hoover Invitational.

Three of those teams were from Shelby County as the Helena Huskies, Oak Mountain Eagles and Spain Park Jaguars took part in the event and found success.

A total of three wrestlers picked up individual championships at the event, while several others made a splash in many different weight classes. Highlights from the results are below.

Cole Thomas was one of two championship winners for the Oak Mountain Eagles. The 115-pound wrestler received a bye in the opening round before reeling off six consecutive matches to finish the tournament with a 7-0 record and the title.

He picked up two pins, two decisions, one technical fall and one major decision along the way.

Barrett Blakely also had a strong showing at the event by taking home the 172-pound championship. Like Thomas, Blakely strung together seven consecutive wins in the tournament to grab the title.

He used a dominant performance featuring four pins, one major decision, one decision and a bye.

After falling in the first round, Patrick Neal and Harrison Kinsey both won five consecutive matches to end on a strong note.

Neal, wrestling in the 108-pound weight class, used three pins, a technical fall and a bye to pick up his three wins in a row.

Kinsey used three pins, two decisions and one major decision in the 154-pound division to close out his tournament.

Brett Cruce had an impressive showing in the 140-pound weight class by winning the third place match. Cruce used a 7-1 record during the tournament to do so.

In his wins, Cruce used two pins, two decisions, one technical fall, one forfeit and a bye. His lone loss came in the semifinals to Hewitt-Trussville’s Stone Barden by way of pin.

Justin Evans and Jordan Davis both wrestled in third place matches as well, but each fell to finish in fourth in their respective weight class.

Evans, wrestling in the 162-pound weight class, picked up three major decisions, two pins and a bye in his six wins. In his two losses, he fell by way of pin and decision.

Davis wrestled in the 222-pound division and used three decisions, two major decisions and a bye to pick up his six wins. His losses consisted of an overtime SV-1 defeat in the semifinals and a 3-1 decision in the third place match.

Thuo, however, was the only one to win one of those third place matches as his impressive season continued at the event.

Young fought in the 287-pound division and fared well. He used three pins and two decisions in his five wins during the tournament.

Rivers, wrestling in the 122-pound classification, used three technical falls, one pin, a bye and one major decision to pick up his six wins to finish fourth.

Helena’s Nathan Dunaway gave the county its third championship at the event thanks to his dominant title run in the 184-pound weight class.

Dunaway finished the event with seven consecutive wins to take home the championship. He gathered wins by way of five pins, one forfeit and one bye. His five pins were the most of any county wrestler at the event.

Another highlight for the Huskies was Will Miller, who finished in sixth in the 108-pound division. His wins included two pins, one decision and a bye.