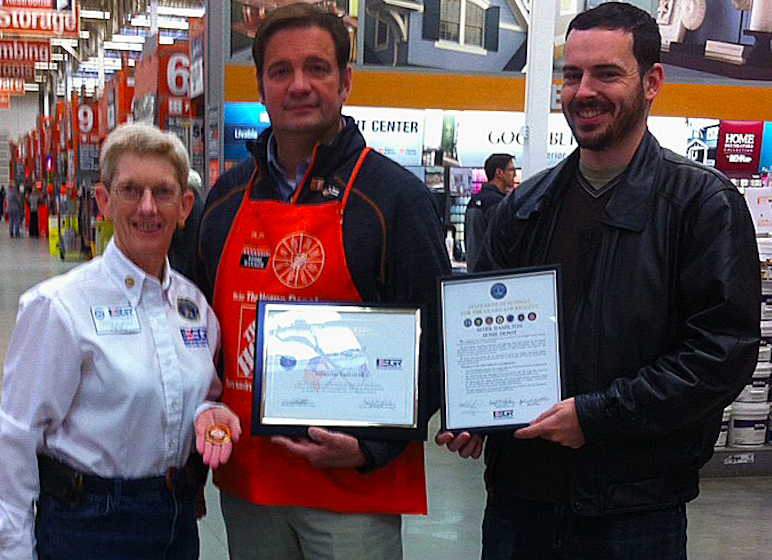 PELHAM – Employer Support of the Guard and Reserve (ESGR) recently awarded Mark Hamilton, of the Home Depot in Pelham, with the Patriot Award on Dec. 27, 2017.

Nancy Waller, Alabama ESGR District 6 chair, travelled to Home Depot to present Hamilton with the award, which reflects the efforts made to support members of the military through a wide-range of measures including flexible scheduling, time off prior to and after deployments, caring for families and granting leaves of absence if needed.

Hamilton was nominated for the award by Spec. Matthew Dorer, a Home Depot employee and member of the Alabama Army National Guard.

“I nominated Mark Hamilton for this award due to him always understanding my issues and bending over backwards to accommodate my military and school schedules, even when those schedules change at the last minute,” Dorer said. “Mr. Hamilton also encouraged me and appreciated my military service even when it caused scheduling problems.”

The ESGR, a Department of Defense program, was established in 1972 to promote cooperation and understanding between Reserve Component Service members and their civilian employers and to assist in the resolution of conflicts arising from an employee’s military commitment.

The ESGR is supported by a network of more than 3,750 volunteers in 54 committees located across all 50 states, the District of Columbia, Guam-CNMI (Commonwealth of the Northern Mariana Islands), Puerto Rico and the U.S. Virgin Islands.