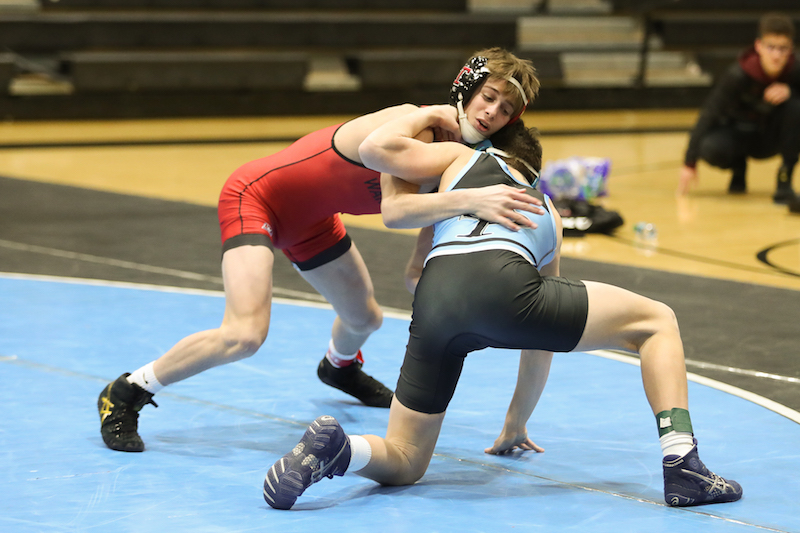 Thompson’s Sam Latona, above, and Gabe Hixenbaugh finished in second in their respective weight classes at the 2018 Cheesehead Invitational in Wisconsin. (For the Reporter/Dawn Harrison)

KAUKAUNA, Wisc. – A total of 39 of the country’s best high school wrestling teams converged on Kaukauna, Wisconsin, to take part in the Cheesehead Invitational from Friday, Jan. 5 to Saturday, Jan. 6, including the Thompson Warriors.

Despite the hundreds of wrestlers from all over the country in attendance, Gabe Hixenbaugh and Sam Latona—being two of the best wrestlers in the country—showed up to the event and proved their dominance as each finished in second place in their respective weight classes.

Latona picked up wins by way of two technical falls, one major decision, one decision, one tie breaker and one bye to get to the championship match of the 120-pound weight class.

Eventually, Latona fell by decision in the first-place match to end his tournament with an overall record of 6-1.

Hixenbaugh had almost identical success in the 132-pound weight class as he also made his way to the championship match. He used three decisions, one major decision, one ultimate tiebreaker and a bye to start the event off 6-0.

He eventually lost in the first-place match by way of technical fall to end his tournament at 6-1 as well.

The Warriors had an unbelievable five other wrestlers finish in the top 10 in their respective weight classes led by Dylan Leseuer in seventh.

Leseuer, wrestling in the 106-pound division, finished the event with a record of 4-3. He used two pins, a decision and a bye in his four wins, while his losses consisted of two pins and a decision.

The next highest finisher was Seth Whitlock in the 285-pound weight class as he took home eighth place. Whitlock finished the tourney with three wins and four losses. His wins came by way of two tie breakers and one decision, while he was pinned in three of his four losses.

Emmanuel Oliver was just behind Whitlock’s mark as he finished in ninth place in the 113-pound weight division. Oliver finished the event with an overall record of 5-2 using four pins and one forfeit in his wins.

Isaac McAdams and Chandler Akins each finished in 10th in their respective weight class.

McAdams, wrestling in the 195-pound weight classes, finished with an overall record of 4-3. He used three pins and one major decision in his wins.

Akins, who wrestled in the 126-pound division, finished 4-3 as well with two decisions, a pin and one bye.