A barrage of 3-pointers leads Yellow Jackets to win 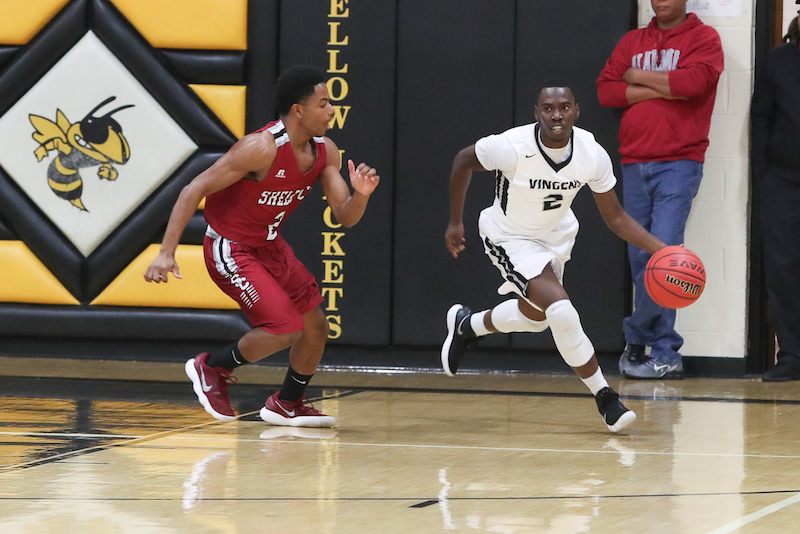 Vincent's Jackson McGinnis goes up for a strong post move against Westminster. He had eight points in the win over the Knights. (Reporter photo/Alec Etheredge)

VINCENT – With the team back in full and ready for the last leg of the season leading to the playoffs, the Vincent Yellow Jackets’ basketball team got shot happy against the Westminster Knights on Tuesday, Jan. 9.

Playing in front of the home crowd a night after downing Fayetteville 78-13, the Yellow Jackets came out and drained seven 3-pointers and put up 50 points to take down the Knights by a final score of 50-35.

The two teams combined for 13 made 3-pointers in the game and shot many more, but it was a strong post presence from Chris Hardie late in the game that was the difference maker as he scored all 12 of his points in the second half, including seven in the final quarter.

The hot shooting from the perimeter, however, was the story of the first half and in particular the first quarter.

Westminster’s Sam Bradford started the game on fire, not just knocking down the game’s first 3-pointer, but draining three in the opening period.

With a 3-0 lead, the Knights 3-2 zone was causing Vincent all kind of trouble in the quarter. It left the Yellow Jackets scoreless for the first two minutes of action.

Vincent’s defense, however, held its own as well and Stanley Cooper eventually ended the scoring drought by burying a 3-pointer with 5:22 remaining in the first quarter to tie the game.

The next nine combined points came from shots behind the arc as Westminster jumped in front 9-6, eventually extending that lead to 11-6.

The Yellow Jackets (14-5, 2-0) were able to put together an answer by ending the quarter on an 8-2 run capped off by a Malik Hamilton 3-pointer with 30 seconds left to give Vincent its first lead of the game at the end of the period.

Hamilton ended the quarter with 11 of his 13 points thanks to three made 3-pointers.

The trend of starting slowly continued in the second quarter as neither team found the bottom of the net for the first two minutes of action.

That eventually changed when Westminster’s Parker Mixon made a layup to give the Knights the lead back at 15-14.

Vincent finally got the seal off the basket over the next few minutes and ended the quarter on a 9-2 run thanks to a 3-pointer from Cooper and four points from Jackson McGinnis.

It gave the Yellow Jackets their largest lead of the game to that point at 23-15 heading into the half.

Halftime adjustments led to a lot of excitement offensively in the third quarter as the two teams combined for 33 points.

Vincent got two more 3-pointers from Cooper and five more points from McGinnis as those two accounted for 11 of the Yellow Jackets’ 15 points in the quarter.

They eventually grabbed a 12-point, 28-16 lead before Westminster started clawing its way back into the contest. The Knights got seven points from Mixon in the quarter and two more 3-pointers from Bradford to eventually get within five points at 38-33 heading into the final quarter.

With Vincent spreading the ball around deep behind the perimeter in the fourth period, it opened up the post for Hardie in several mismatch opportunities.

He went to work for the Yellow Jackets and scored the team’s first six points of the quarter to give Vincent a 44-35 advantage, one they didn’t relinquish the remainder of the game. The Jackets went on a 6-0 run over the final two minutes to create the final score and outscored Westminster 12-2 in the quarter.

Cooper ended the game as Vincent’s leading scorer with 14 points, while Hamilton added 13 and Hardie had 12 for three double-figure scorers. McGinnis ended the night with eight points.

Bradford had a game-high 15 points for Westminster thanks to his five 3-pointers, while Mixon added 13. Those two combined for 28 of the Knights’ 35 points in the game.