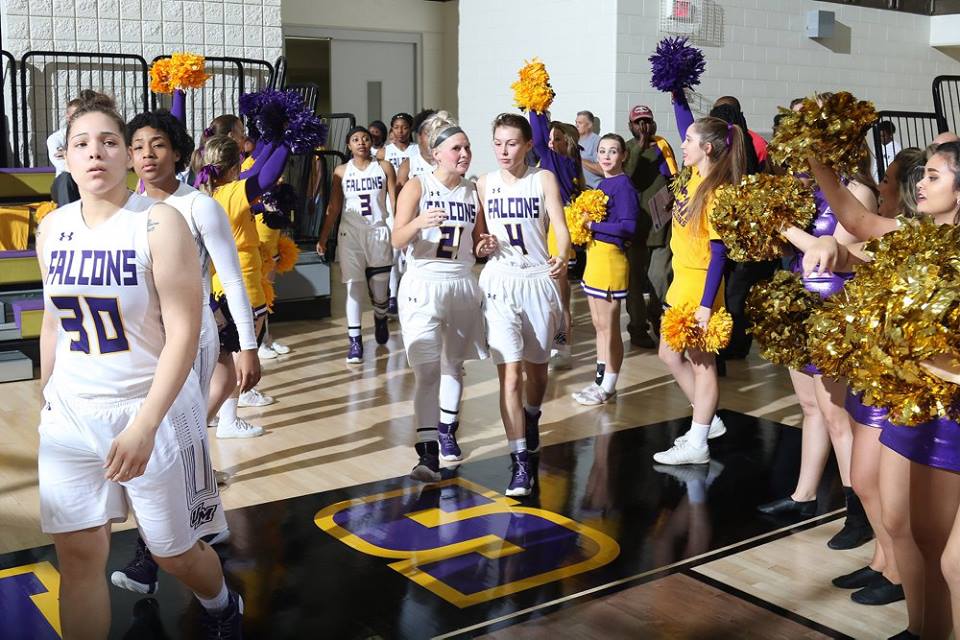 Montevallo's girls basketball team has struggled this season and failed to pick up their first conference win of the season on Tuesday, Jan. 9. (Contributed/University of Montevallo)

MONTEVALLO – The Lady Falcons are still searching for their first conference win of the 2017-18 season after another tough loss at home, 95-60 to the Shorter University Hawks Tuesday, Jan. 9.

Gary Van Atta, the university’s all-time winningest coach in women’s basketball, is having a hard time adjusting to the Gulf South Conference in his second stint with the Falcons going just 2-24 since his return.

Montevallo (2-12, 0-7) is still vertically challenged in the rebuild of the program with four of its five tallest players being freshman this year for Van Atta.

It has caused the Falcons to make their living with outside shooting, something they struggled with Tuesday night.

Montevallo used a 12-5 run to start the second quarter, but Shorter’s consistency and rebounding kept the Falcons at bay.

Seven players scored in the first half for Montevallo, but no one could muster more than five points as they took a 28-21 deficit into halftime.

The Falcons started quickly again in the third quarter drawing within 12, but Shorter began exploiting UM’s passing lanes en route to forcing 11 turnovers in the period.

The Hawks outscored Montevallo 19-4 the rest of the way as steals lead to layups and nine trips to the free throw line.

The trend of fast starts continued for Montevallo in the fourth quarter, but, down 29 after three quarters, the women’s efforts failed to make a dent in a dominant night for shorter in the paint.

Montevallo’s lack of height was particularly exposed as the Hawks turned a six-rebound advantage at halftime into 16 by the game’s end.

The Hawks made a living inside by outscoring the Falcons 46-20 on the strength of 15 offensive rebounds.

Shorter (4-10, 2-6) also made UM pay for those extra turnovers in the second half converting them into 21 points to pull away for its second conference road win of the season.

The Falcons, who fell to just 2-6 at home, were led by De’Asia Marsh who nearly turned in a double-double with 14 points and nine rebounds, while Kassidy Bonebrake chipped in 13 point.

Montevallo will have its next chance to jump into the conference win column this Saturday, Jan. 13 when they visit Delta State University at 2 p.m.