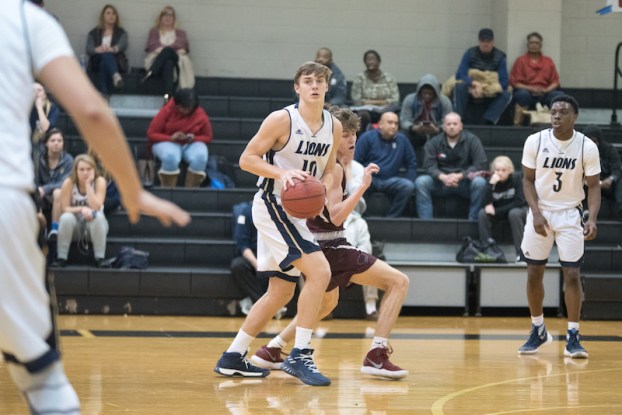 SYLACAUGA – A combined 52 points from Michael Hiers and Zac Nuyt wasn’t enough for the Briarwood Lions in an area contest with Sylacauga on Tuesday, Jan. 9, as they went on the road and fell 81-74 to the Aggies.

It was a third quarter lull that seemed to be the difference in the game as Sylacauga outscored Briarwood (8-6, 1-1) 27-14 in the period.

It gave the Aggies a nine-point, 59-50 lead heading into the final quarter of play, but Hiers kept his team alive in the comeback effort.

He went on to score nine points in the fourth, along with six from Nuyt, but five missed free throws in the quarter was too much for Briarwood to overcome.

For the night, the Lions shot just 10-21 from the free throw line, while Sylacauga got to the line 48 times, draining 32 of those 48 attempts. That became a huge difference in the final outcome as the Aggies continued finding ways to get to the line and make shots.

In the fourth quarter alone, with Briarwood trailing, they were forced to foul to attempt the comeback, but Sylacauga drained 15 of its 22 free throws to ice the game.

Briarwood did however start the game on a strong note in the first two quarters. In the first period, Hiers dropped 11 points as the Lions posted 17 points and limited the Aggies to just four made baskets to take a 17-11 lead at the end of the quarter.

Nuyt became the storyline for Briarwood in the second quarter as he caught fire and scored 12 points for the Lions. Hiers added five additional points as the team put up 19 more points in the quarter.

Sylacauga, however, got on a roll offensively as well. The Aggies started making possessions count and saw three players score at least six points in the period.

They were able to make 11 of 14 free throw attempts to score 21 points in the quarter and help cut into the lead. Still though, Briarwood held a 36-32 lead heading into the half.

While 14 points isn’t a bad quarter in most games, it got the Lions behind the eight ball in the third quarter of this game with the way Sylacauga’s offense was playing.

The Aggies picked up right where they left off in the first half and even one-upped their second quarter performance. They went on to score 27 points in the quarter behind six different scorers.

Hiers was able to add six more points to his total in the quarter, but Nuyt slowed down scoring just one as the Lions struggled to answer Sylacauga’s strong play over the second and third quarter.

Briarwood figured it out in the final quarter scoring 24 points—all but three from just three players—but the Aggies’ built-up lead as well as strong free throw shooting was too much to overcome as they put up 22 more points in the period to earn the win.

Hiers ended the night with an impressive game-high 31 points, while Nuyt finished second in the game with his 21 for the Lions. Sylacauga had four scorers in double digits.