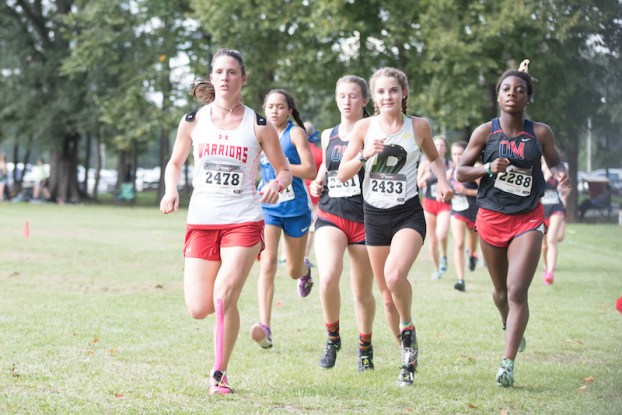 BIRMINGHAM – We are right in the thick of the 2018 track and field season and one of the biggest regular season events of the year took place at the Birmingham Crossplex on Saturday, Jan. 6, as several teams flocked to the Ice Breaker Invitational.

As she did the entire cross country season, McKenzie Hogue led the Warriors with two top-2 finishes in the event to continue showing her dominance at running.

Hogue, a junior, picked up the first-place finish in the 3,200-meter race finishing in 11:20.07, which was more than 13 seconds ahead of second place.

Her second-place finish came in the 1,600-meter race where she ran a time of 5:14.62, which was eight seconds behind first and four seconds ahead of third.

Zakiria Holifield, a sophomore for the Warriors, also had a strong day in two events. She finished 13th in the 60-meter dash finals with a time of 8.08.

She also finished in 20th in the 400-meter dash finals with a time of 1:02.16 as the speedy runner had a nice showing. Senior Alandria McCurdy also fared well in the race with a finish of 25th thanks to a time of 8.26.

Junior Madison Wright had an impressive showing in the 60-meter hurdles finishing the race in 10.26, just over a second slower than first place.

Elizabeth Sutton, a sophomore for Thompson, did well in the pole vaulting finals with a height of 8 feet 6 inches completed.

In another field event, senior Ebony Butler finished in second in the girls’ shot put finals with a distance of 36 feet 5 inches.

Moving over to the boys’ events, Jace Jones started things off with a strong second-place showing in the 1,600-meter race. The sophomore, who had a strong showing at the cross country state championship, finished the race in 4:30.46.

In the 800-meter finals, the Warriors ended up with two top-10 finishers. Timothy Osborne, a senior, finished the race in 2:00.81, while fellow senior Thomas Cousins finished in eighth with a time of 2:02.96.

Freshman Jared Hurst and senior Phillip Lewis had impressive performances in the high jump finals. Hurst finished with a distance of 5 feet 10 inches, while Lewis had a total of 5 feet 8 inches.

Antonio Brown finished in 15th in the boys high jump finals with a length of 19 feet 2 inches, while Gavin Gray finished in 21st with a total of 18 feet 10.75 inches.

Gray also had a nice race in the triple jump finishing in ninth with a distance of 41 feet 2 inches.

The biggest highlight for the Spain Park girls was Holland Lidikay. The sophomore took home 24th in the 1,600-meter race with a time of 5:53.12.

Kameron McDaniel also had a top-10 finish for the boys with his 10th place finish in the 400-meter race. The junior ran the race in 51.75 seconds.

In that same race, senior Zander Kazzie took home 30th with a time of 53.39 seconds.

McDaniel had another impressive showing in the 60-meter dash finishing in 12th with a time of 7.13 seconds.