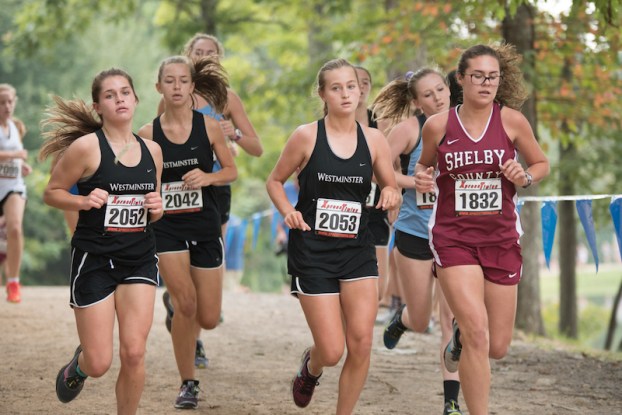 Westminster's running program continued to shine during a recent indoor event. Pictured above during cross country season, the Knights indoor track and field program had success at the recent Ice Breaker Invitational. (File)

BIRMINGHAM – Westminster at Oak Mountain’s track and field program has opened up a new season with high expectations after the girls finished runner-up in both indoor and outdoor last year and the boys won the outdoor state championship.

Both the boys and girls competed at the 2018 Ice Breaker Invitational and each continued to show why they are consistently considered among the state’s elite programs.

Starting in the 1,600-meter finals for the girls, Westminster ended up with four finishers inside the top 20.

Senior Camilla Lemons led the way with a finish of seventh after running the race in 5:53.59

The Knights had two more finish inside the top 15 as Arden McCullough and Katie Wright finished in 13th and 15th, respectively.

The final of the top-20 finishers in the 1,600-meter race was eighth grader Courtney Callahan, who finished with a time of 6:19.24.

Freshman Hallie Porterfield led the way with a finish of fourth with a time of 12:22.94. Her strong showing marked a tie for the highest finish of any Westminster runner in both the boys and girls races.

The next highlight came from Sarah Kate Lipperd in the 400-meter dash. Lipperd, a senior, finished in eighth with a time of 1:04.

As a team, the Knights had one strong finish in a relay race as they finished in fourth in the 4X800-meter relay with a time of 11:11.03.

Sophomore Peyton Metcalf was the other runner to take home a fourth-place finish in the event as she finished the 60-meter hurdles with a time of 9.98, which was just .79 seconds behind the championship Ashleigh Ivory of Demopolis in a photo finish.

The Knights’ final impressive performance came in the girls 800-meter race as four runners finished inside the top 25 led by Lipperd yet again.

She finished the race in 2:31.94, which was good enough for sixth place and her second top-8 finish of the event.

Lemons was the next highest finisher for Westminster, finishing in 14th with a time of 2:41.06. McCullough and Faulk also had good performances for the second time in the event.

While the boys’ success wasn’t as dominant as the girls, there were three events that Westminster shined in starting with the 3,200-meter run as three runners finished inside the top 10.

The Knights were led by senior Nate Collins as he tied that fourth-place mark set by Metcalf and Porterfield. Collins finished the race with a time of 9:56.82, which was just six seconds behind the winning time.

Just three spots behind Collins was freshman Hunter Wright, who continues his success from the cross country season. Wright finished with a time of 10:32.70.

Daniel Collins also had a strong performance with a 10th place finish. The senior finished the race with a time of 11:00.44.

The boys also had three finish inside the top 50 of the 400-meter dash thanks to Cooper Reynolds (29th), John Richardson (32nd) and Pierce Moffett (45th).

By ALEC ETHEREDGE | Sports Editor We are now five weeks into the 2017-18 basketball season whether you believe that... read more