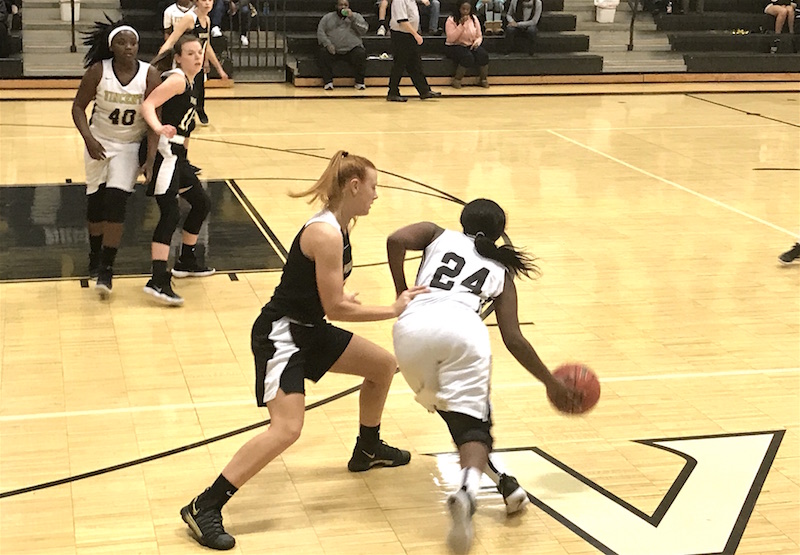 VINCENT – Westminster at Oak Mountain’s girls basketball team quest for a repeat trip to the Final 4 has gotten off to a mediocre start in 2017-18, but there is no doubting the Knights’ talent and it showed in a dominant 46-29 road victory over the Vincent Yellow Jackets on Tuesday, Jan. 9.

After a slow start, the Yellow Jackets were able to record 35 combined points between the second and third quarters to run away with the win.

The first quarter, however, went much more to the delight of the Yellow Jackets as they opened the first 8 minutes by taking an 8-7 lead.

Aniya Norwood’s five points in the opening quarter were a big reason why Vincent was able to take the early lead as well.

Westminster is a team that likes to force turnovers and turn them into points and that trend became apparent in the second quarter as the Knights went on a 21-10 run in the period.

While it ended up being Vincent’s best quarter of the game offensively, Westminster got seven points from Anna Richburg, her game total, and six points from Morgan White to take control of the game.

Their strong play in the quarter led to a 28-18 lead at the half.

Westminster came out and continued the same dominance in the third quarter of play, but more specifically on the defensive end.

After giving up 18 combined points in the first half, the Knights’ defense locked down and gave up just two points in the third period.

Westminster’s offense continued taking advantage of strong defensive play and turnovers that led to many fast break opportunities. Thanks to five more points from White, four from Welch and three from Macy Mixon, the Knights were able to extend their lead to 42-20 at the end of the third quarter.

The game, seemingly manageable for Vincent up until the third quarter, was all but out of reach heading to the final quarter of play, but the Yellow Jackets still battled at the beginning of the fourth.

Vincent started the quarter on a 5-0 run and eventually got within 15 points after extending the run to 9-2 to trim the deficit to 44-29.

Westminster ended up scoring two more points the remainder of the game for just four in the quarter, but the defense didn’t give up another point as the Knights held on for the 46-29 win.

White to led Westminster with 13 points in the game thanks in large part to several fast break opportunities.

Nine different players scored with five ending the night with at least five points. Richburg ended as the second leading scorer for the Knights with her seven points in the second quarter.

Vincent was led by Norwood with a game-high 14 points, while just five players scored.