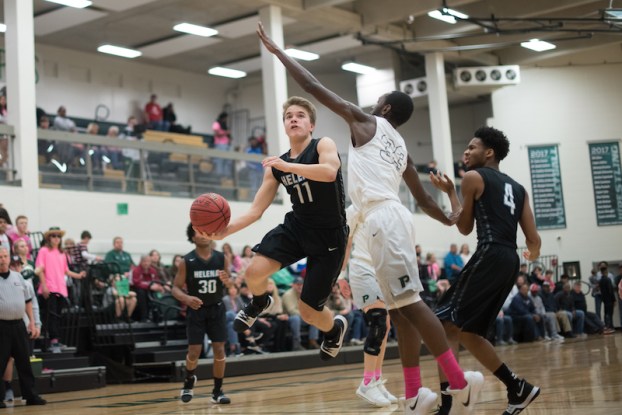 Huskies No. 3, Yellow Jackets No. 4 in latest rankings

It has been close to a month since the Alabama Sports Writers Association put out its high school basketball rankings, but on Wednesday, Jan. 10, the rankings returned.

Although the rankings took a break for the holidays, the basketball action continued and several teams made statements in tournament action, even those not found in the rankings.

Helena and Vincent were the only two county boys teams to be found inside their respective top 10, while Calera and Oak Mountain both received votes to be ranked as well.

The Huskies started the season 9-0 and eventually vaulted up to No. 1 in the 6A standings, but fell down to No. 6 in the standings just before the holiday break thanks to a loss to McAdory—a team they had beaten just over a week earlier.

Helena, however, responded with another nine game winning streak over the break to eventually extend its record to a jaw-dropping 18-1 overall.

The Huskies then went on to drop the championship game of the Jefferson-Shelby Hoops Classic on Saturday, Jan. 6, by a final score of 44-39. It was a game Helena led throughout, but some calls not going the Huskies’ way late and some misfortune led to the loss.

It’s a record that has them at No. 3 in the first ASWA poll of the new year. While they have the best record in Class 6A, it’s a classification that features several great teams as they sit behind Carver-Montgomery at No. 1 and LeFlore at No. 2.

Teams like Muscle Shoals, Hazel Green, Pinson Valley and Ramsay are right on the Huskies’ tail and feature complete teams.

For Vincent, it was an average holiday season as several key starters missed with other obligations or injuries.

Sitting at No. 1 in the last rankings before the holidays, the Yellow Jackets went 5-4 over the break and fell down to No. 4 in the most recent 2A standings.

With a 14-5 (2-0) record, two sophomores in the starting lineup and everything they want to accomplish still in front of them, it’s not a bad spot for the Yellow Jackets to be sitting in a little over halfway through the season.

Another team that has been on fire is the Calera Eagles. Despite not cracking the 5A top 10 in the latest rankings, Calera has improved to 14-4 after starting the season 1-3.

During the month of December, the Eagles eventually went on to win 12 consecutive games to eventually get to 13-3, before falling to Helena in the Jefferson-Shelby Hoops Classic.

As one of the more athletic teams in the county and state, Calera (14-4, 4-0) has the chance to make a splash if they play fundamentally sound and play together as a team.

The Oak Mountain Eagles have also been on a roll and were nominated in Class 7A with an overall record of 11-5 and an area record of 1-0.

That first area win of the season came on Tuesday, Jan. 9, as the Eagles picked up a victory over the Spain Park Jaguars. With games against Mountain Brook and Huffman looming on the schedule, Oak Mountain has a chance to really make some noise by pulling off upsets of the top twi teams in the classification.

Montevallo is another team that’s not in the rankings nor nominated, but worth mentioning. The Bulldogs started the season 2-5, but went on to win six of their next seven games, including an upset of Fultondale.

They now sit at 8-8 (1-1) on the season and are gaining confidence as an extremely young team.

A barrage of 3-pointers leads Yellow Jackets to win

By ALEC ETHEREDGE | Sports Editor VINCENT – With the team back in full and ready for the last leg... read more