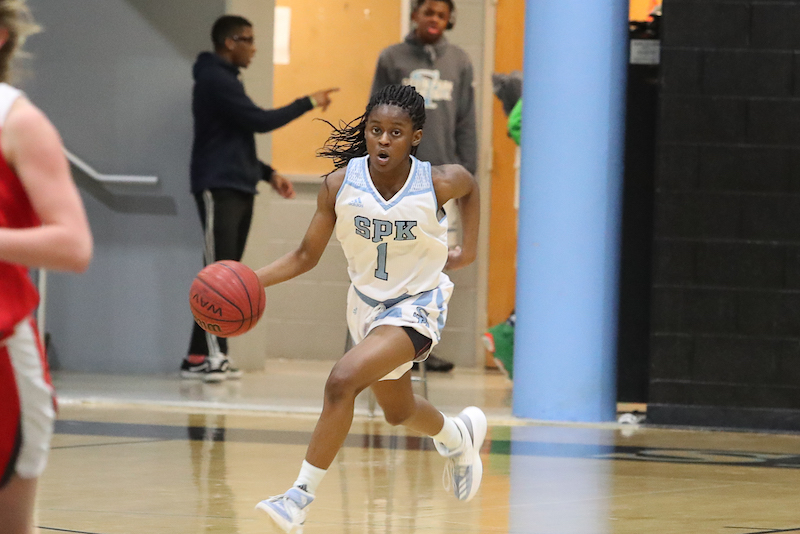 Spain Park's girls are ranked No. 2 just behind Hoover in the first basketball standings of 2018. (For the Reporter/Dawn Harrison)

It has been close to a month since the Alabama Sports Writers Association put out its high school basketball rankings, but on Wednesday, Jan. 10, the rankings returned.

Although the rankings took a break for the holidays, the basketball action continued and several teams made statements in tournament action, even those not found in the rankings.

One of the most dominant stretches this season has come from the Spain Park Jaguars’ girls basketball team. The Jags currently sit at No. 2 in the first 7A standings of the new year.

The season-high ranking for SPHS comes in large part due to an 18-3 overall record and a 1-0 record in area play.

Spain Park has won nine consecutive games and in dominant fashion to gather that impressive record. That nine game stretch included two separate four-game winning streaks to win the 2017 Lady Jag Classic and the 2017 Doc Classic to give the Jaguars two tournament championships during the holidays.

During that nine game winning streak, Spain Park has won by an unbelievable average of 23.6 points per game with its closest game being a 10-point, 66-56 win over Homewood.

Oak Mountain, the most recent win for Spain Park, was not ranked, but did receive nominations for a spot inside the 7A top 10. The Eagles are currently 13-5 overall this season and won the Mortimer Jordan holiday tournament over the break.

The Shelby County Wildcats, who are 14-2 according to the ASWA, found themselves ranked No. 9 in the 5A standings to start the new year.

In the Wildcats’ most recent game, they lost a heartbreaker to Oak Mountain in the final 30 seconds after gathering a strong 12-point lead at one point in the fourth quarter.

Still though, this is a team that is solid all around on the court and has a very strong chance to win the Class 5A, Area 8 championship over Briarwood, Moody and Sylacauga.

Like Spain Park, Montevallo’s girls have been on fire this season with several impressive scorers on the team.

The Bulldogs have pushed their overall record to 18-3 as they sit tied with the Jaguars for the best overall girls record in the county, which was good enough for the No. 7 spot in Class 3A.

While that ranking may seem low for their record, four of the six teams ranked in front of the Bulldogs have better records this season as the 3A classification has been very impressive.

Montevallo made a run in the Jefferson-Shelby Hoops classic, but eventually fell in the semifinals to 6A Shades Valley, who is 12-4 this season.

Westminster at Oak Mountain was the final team ranked in its respective classification. The Knights, now 7-5 on the season, came in at No. 9 in the 1A classification.

As a defending Final 4 team, Westminster is still trying to find itself in 2017-18, but seem to be on the right path with a roster that is still relatively young.

The Knights have won three consecutive games and have played one of the more difficult schedules for a 1A team as they look to challenge themselves and be the best they can be by the end of the season.