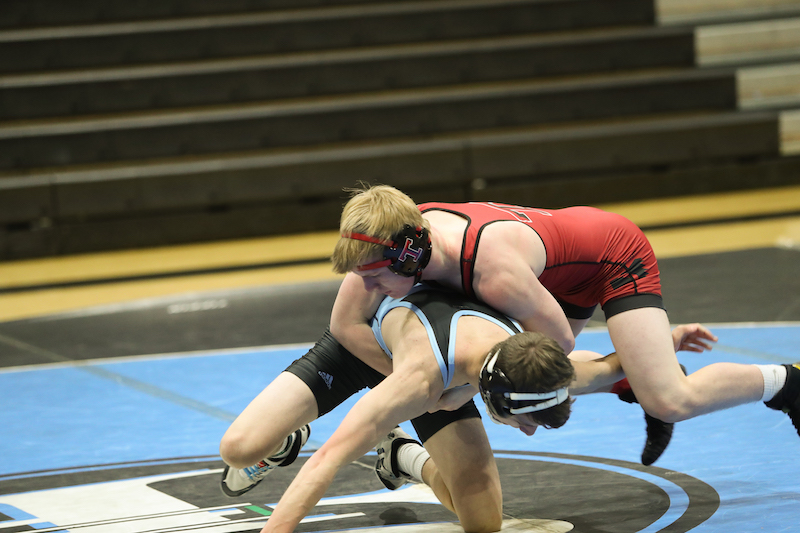 Gabe Hixenbaugh, pictured above in a match with Spain Park, was one of five Thompson wrestlers to pick up a pin in a win over Hoover. The victory gave the Warriors their second straight area championship. (For the Reporter/Dawn Harrison)

ALABASTER – The Thompson Warriors are back on the dynasty track in high school wrestling.

After some turmoil over the last couple of years and no state championship since 2015 after bringing home five in a row, the Warriors are in the midst of one of their best seasons.

The most recent accolade, a 48-21 win over the Hoover Buccaneers on Thompson’s home floor, gave the Warriors their second consecutive area championship.

The Warriors, who were coming off a 63-8 victory over Prattville the night before, picked up five pins in 14 matches, while limiting the Bucs to just two pins.

It continued a dominant stretch for Thompson, who in duals with one other opponent has now won by at least 27 points in each match, taking down Hewitt-Trussville 60-7, Spain Park 66-9 and Oak Mountain 53-18 in addition to the dominant wins over Prattville and Hoover.

The Buccaneers did start the match with some confidence, however. Kicking things off in the 152-pound weight class, Josh Reynolds was able to pick up a decision win over Michael Jackson for three points.

Thompson’s Tyler Gilson answered quickly with a pin over J.T. Foster of Hoover to give the Warriors a 6-3 advantage.

The Bucs, however, put together their best stretch of the night in the next two matchups. Dawson Rye was able to pick up another decision for Hoover to tie things at 6-6, before D’Angelo Dewitt gave the Buccaneers a 10-6 lead with a major-decision win in the 182-pound weight class.

Thompson went on to win eight of the next 10 matchups, however, and won four of those eight with pins.

It started with Isaac McAdams, who picked up a pin in the 195-pound division over Kashuan Fails.

Bryce Carnes picked up one of Hoover’s two pins by taking down Aubrey Glidewell in the 220-pound weight class.

The Warriors, trailing 16-12, went on to win seven consecutive matches after that loss for their final 36 points of the night to run away with the win.

Seth Whitlock started things off with a pin in the highest weight class of 185 pounds, while Dylan Lesueur picked up a forfeit win for back-to-back six point matches for the Warriors.

Jacob Brady added Hoover’s only other points with a pin over Josiah Campbell in the 145-pound weight class to give the Bucs 22 total points. An unsportsmanlike penalty on Hoover, however, took one of those points away for the final score of 48-21.