CALERA – A 36-year-old Calera woman was recently arrested after allegedly stabbing her ex-boyfriend with a knife during a domestic dispute. 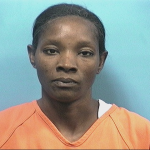 Consondra Janetta Wade, who lists an address on 20th Street, was arrested by the Calera Police Department on Jan. 1 and charged with first-degree domestic violence, unauthorized use of a vehicle and alias non-support.

On Dec. 17, 2017, Wade allegedly committed the crime of first-degree assault, according to court documents. Calera Police Chief Sean Lemley said Wade is accused of using a knife to stab her ex-boyfriend in the shoulder. The victim’s wounds were not life threatening.

First-degree domestic violence is a Class A felony and unauthorized use of a vehicle and alias non-support are both misdemeanors. A Class A felony is punishable upon conviction by 10 years to life in prison and up to $60,000 in fines.