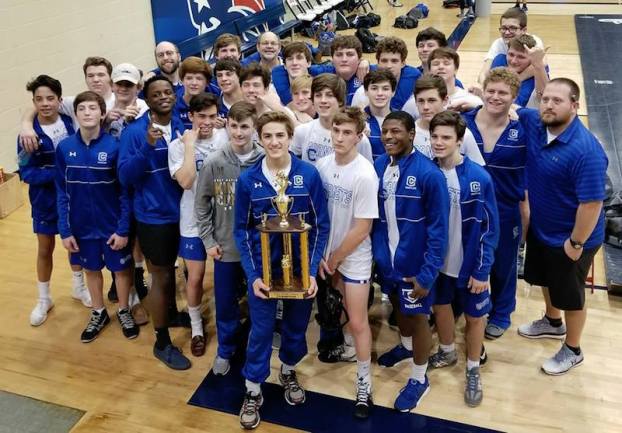 HOMEWOOD – Chelsea’s wrestling team made a statement when it traveled to Homewood for the Region 5 championship on Thursday, Jan. 11, as the Hornets swept through the tournament by taking down Helena, Homewood, Shades Valley and Pelham.

Not only did Chelsea win all four of those matches, but they won each by at least 18 points in dominating fashion.

Starting with their matchup against familiar foe Helena, the Hornets picked up a 49-24 win.

Chelsea allowed just three of its wrestlers to get pinned as Will Miller (106), Alex Miller (108), Nathan Dunaway (182) and Seaburn Hines (285) picked up pins for the Huskies. All four of those wrestlers are contenders for state championships in their respective weight class.

Chelsea, on the other hand, had much more consistency and went on to win the remainder of its matchup with the Huskies.

The Hornets went on to win the other 10 matches against Helena to contribute to the final score of 49-24. Chelsea was led by pins from Adam Berryman, Clint Glaze, Elliot Gage, Sam Ingram and Wesley Pouncey to account for 30 of the team’s 49 points.

Helena went on to win its next three matches in a row after losing to the Hornets, taking down Homewood 54-29, Shades Valley 60-23 and Pelham 59-21. Unbelievably both of the Miller’s as well as Dunaway and Hines went on to finish the tournament with a perfect record going for 24 points apiece.

Albeit forfeits played a part in those point totals, to pick up six points in every match of the regional tournament was impressive and shows the caliber by which each wrestles.

Chelsea found itself in its closest match of the tournament when the Hornets squared off against the host Homewood Patriots in the next round, but they were still able to run away with an 18-point, 45-27 win.

The only other pin for Chelsea came from Ingram in the 170-pound weight class. The Hornets also picked up forfeit wins in three other matches, which played a key part in the win.

The Hornets continued picking up steam and grabbed a dominant win over Shades Valley in their next match by a final of 58-15. The Hornets lost just three matches, while winning 11.

Glaze, Jones and Crowson picked up the only Chelsea pins, while the Hornets got five more forfeit wins for 30 of their 58 points.

Chelsea picked up its most dominant win of the region championship over rival Pelham. The Hornets outscored the Panthers by 52 points in a 62-10 win to complete the sweep.

Bryce Wanagat with a major decision and Jordan Copeland with a pin accounted for all 10 of Pelham’s points, while Chelsea won the other 12 matches.

By GRAHAM BROOKS / Staff Writer PELHAM–When the Helena Huskies and Pelham Panthers get together, you can always expect a... read more