CALERA – A 36-year-old woman was arrested by the Calera Police Department and charged with a slew of drug-related crimes, including drug trafficking. 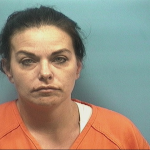 Candace Leigh Goins, who lists an address on Star Trek Drive, was arrested on Dec. 31, 2017 during a routine traffic stop.

Calera Police Chief Sean Lemley said it was during the traffic stop that Goins was found to be in possession of controlled substances. Lemley said he could not go into detail about what was found in Goins’ possession because the case is still active.

However, the traffic stop led to Goins being charged with drug trafficking, unlawful possession of controlled substances, illegal possession of prescription drugs, possession of drug paraphernalia and obstruction of justice.

Lemley said the obstruction of justice charge stemmed from Goins giving false information in an attempt to avoid arrest. At the time of the Dec. 31 arrest, Goins already had a warrant out for her arrest.