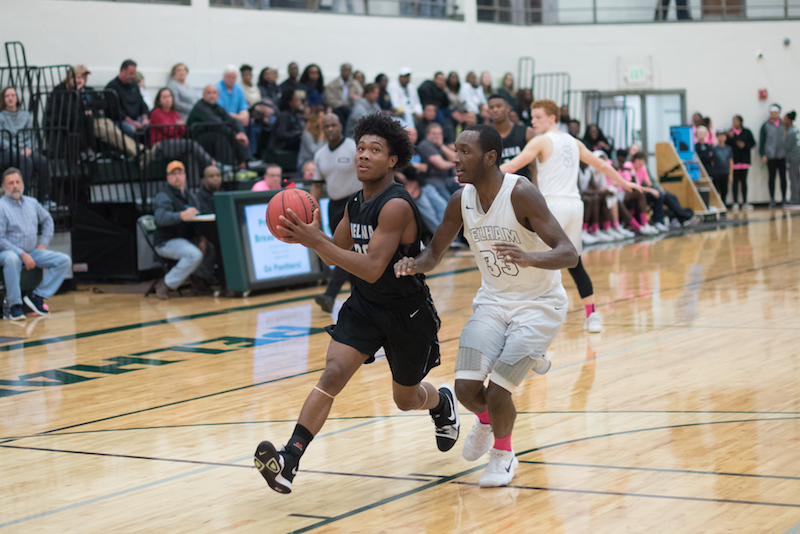 Helena's boys basketball team became the first to reach 20 wins this season as they won back-to-back games over the weekend to improve to 21-2. (Reporter photo/Keith McCoy)

There were some big highlights in basketball over the weekend as many teams competed in area games on Friday night and others also played two games in two days competing on Saturday as well. Below is a recap from all of the action from Jan. 11-13.

The Spain Park Jaguars competed against the No. 1 team in the state on Friday night as they hosted the Huffman Vikings. The Jags ended up falling 88-55 to the Vikings and now sit at 5-12 (0-2) on the season.

Thompson’s boys played host to Vestavia Hills in a big area matchup on Friday night, but ended up falling 67-32 as the Warriors still try to get some young faces experience. Thompson fell to 0-2 in area play after losing to Hoover earlier in the week.

Oak Mountain was one of a few teams to compete on both Friday and Saturday. The Eagles took on No. 2 Mountain Brook on Friday night and fell 53-39 to fall to 1-1 in area play.

The next day, playing without Drew Dunn and Carson Bobo, the Eagles lost 61-49 to Cordova. Dunn had an MCL sprain following the Mountain Brook loss, while Bobo was on a recruiting trip to Princeton.

Blake Hollingsworth led the Eagles with 18 points in the Cordova loss, while Chris Mayweather added 14. Oak Mountain is now 11-7 (1-1) on the season.

The Helena Huskies continue to be one of the best teams in the state. Sitting at No. 3 in the 6A rankings, the Huskies won two consecutive games over the weekend.

It started on Friday night with a 59-35 win over Montevallo and ended on Saturday with a 53-35 win over Central-Tuscaloosa.

With the two dominant wins, Helena moved to 21-2 on the season as the county’s first team to get to 20 wins this year. The Huskies also sit at 1-0 in area play with two area games on the schedule for the week of Jan. 15.

Helena has now responded to its second loss of the season with three consecutive wins. They have two winning-streak spurts of nine games this season and look for that to continue.

Possibly the second hottest boys team next to Helena is Calera, who continues to make waves in the 5A classification.

The Eagles picked up two wins in a row over the weekend taking down Dallas County for an area win on Friday night and Chelsea 57-53 for a big county win on Saturday.

Calera was down by 10 heading into the fourth quarter of the Dallas County game, but was able to come back and pull off an 80-78 win in the final seconds to clinch the Class 5A, Area 6 title very early in January.

With a 5-0 record in area play to grab the regular-season title, the Eagles will host the Area 6 tournament at the beginning of February. Since losing in the quarterfinals of the Jefferson-Shelby Classic, Calera has won three consecutive games, which gives them victories in 15 of its last 16 games.

Briarwood canceled school on a Friday because of the flu, which also canceled this area basketball matchup.

Montevallo fell to 6A No. 3 Helena 59-35 on Friday night. The Bulldogs hung tough for a long time, but the Huskies eventually became too much. Montevallo is now 8-9 overall this season and 1-0 in area play as the team is starting to find some success.

The Vincent Yellow Jackets are back on the winning path since the Jefferson-Shelby Hoops Classic came to an end. They beat Fayetteville 78-13 and Westminster at Oak Mountain 50-35 early last week, before taking down B.B. Comer 53-39 on Thursday night.

Vincent was led by Jackson McGinnis in the win over B.B. Comer as he posted 17 points. Stanley Cooper added 15, while J.T. Youngblood and Rashad Kelley played tough as well.

The Yellow Jackets are now 15-5 overall this season and 2-0 in area play.

The Westminster boys fell 94-48 to Cornerstone Schools of Alabama, who is one of the better teams in the 1A classification with a 16-6 overall record and 4-0 area record.