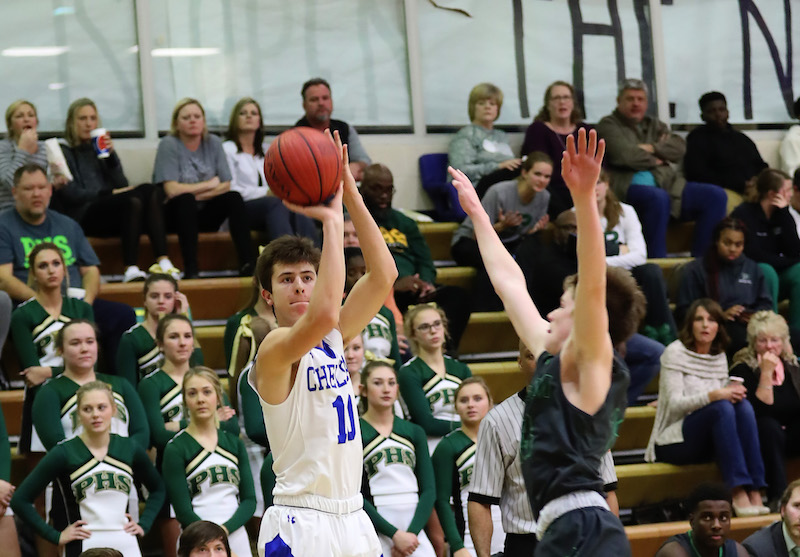 Jordan Parker drives down the lane against Pelham. She had nine points, while teammate Hope Richard had a game-high 20 points in the win. (For the Reporter/Larry Dancy)

PELHAM – It was an exciting night for one rivalry on Friday, Jan. 12, as the Chelsea Hornets and Pelham Panthers met at Pelham High School to renew their area basketball rivalry in both boys and girls hoops action.

While both girls teams have struggled this season, each fought hard with an area win on the line, which led to an exciting 44-42 win for the Hornets.

The boys game, on the other hand, was a bit more one-sided thanks to an impressive first half from Chelsea, which eventually led to a 60-43 area-win for the Hornets. A recap from both games is below.

A game of runs and back-and-forth action took place with both girls teams took to the floor to kick off the night.

For the first four quarters of play, each team traded successful quarters with Pelham grabbing the upper hand first and then each team trading back and forth over the next three quarters leading to a 35-35 tie at the end of regulation.

In the third quarter, the Panthers grabbed the momentum back and went on a 10-3 run in what looked like it could have decided the game. The Hornets, however, responded in a big spot down 29-21 to start the fourth quarter.

Chelsea outscored Pelham 14-6 in the fourth quarter thanks to Hope Richard scoring 10 of her game-high 20 points in the post.

In overtime, Richard was limited to just two points, but they were both important free throws to help seal the win. The Hornets ended the overtime period 4-8 from the line, which led to them narrowly outscoring the Panthers 9-7 to pick up the area win.

Behind Richard, Jordan Parker had nine points for Chelsea with six of those nine coming in the first quarter.

While consistency was tough to come by for the girls, at least one of the teams saw a more balanced attack throughout the boys games.

Pelham’s closest quarter was a 10-9 effort in the third, but they were still on the wrong end of that as Chelsea continued stretching its lead.

The Hornets ended the game with a 24-20 fourth quarter as the teams finally started playing some exciting back-and-forth offensive basketball after struggling to find the basket consistently through the first three quarters.

Justin Allison had a game-high 22 points thanks to a 12-15 mark at the free throw line. Jonah Moore led Chelsea with 17 points, eight of which came in the final quarter off the bench.